Loanna Morrison tells us she's doubtful about climate change, thinks the public sector is too big and admits that the Lib Dems "have done quite a good job". 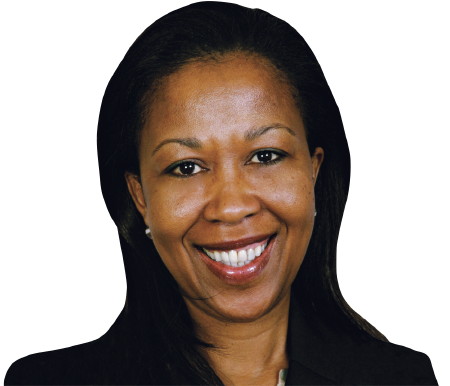 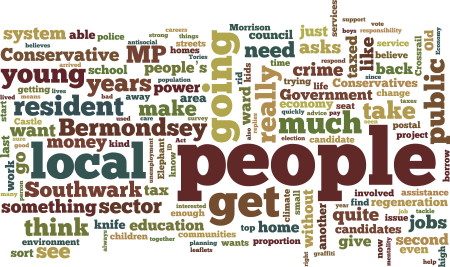 Wordle representation of this interview generated at wordle.net

Last month we asked users of the SE1 website what they would most like to ask their local parliamentary candidates. We put a selection of those questions to the Labour, Lib Dem and Conservative candidates. Here's what Loanna Morrison had to say.

"I spent the first part of my childhood in Jamaica and my grandmother was really strict," says Loanna. "She was the kind of person you don't tell a lie to or steal from. She was really strong on education.

"I used to walk two or three miles to school – without any assistance – at the age of seven. She insisted that you must go to school. Education is an absolute necessity if you want to be anything in the world.

"For me, the Government can only enable that, they can only make the opportunity for that. They can't make it happen for you without your input or assistance. It's a two-way street.

"The socialist ideology that I've lived under in the last 15 years has not achieved any of those things.

"More than a year ago there was a spate of killing among young kids. That shocked me to the core because that sort of gang mentality was just in its infancy when my son was 10 or 11 years old.

"They used to hang out at bus shelters and spray graffiti and risk their lives trying to spray their tags on walls that were too high. So it has sort of escalated really.

"I thought that I don't want to see another generation of kids going through that hopeless situation where they feel that life is so terrible or so bad that they can't walk on their streets without carrying a knife in case they get attacked or they live in the wrong postcode.

"I think that the reason why this sort of mentality has grown up in the last 13 years is because the education system is very unchallenging to boys. Boys like to be in teams and because school sports have declined so much boys don't have any way of sharing and getting rid of their aggression."

How does Loanna view the prospect of cuts in public expenditure after the election?

"What's happened over the last 10 or 15 years is that the Government has somehow led itself to believe that it can employ the entire population and forget about the private sector. This is why we have so much debt now. The Government has had to borrow to pay people's wages."

She believes that even if the public sector faces cutbacks, new better-paid jobs will also be created in a resurgent private sector.

"An MP doesn't necessarily have to have a second home," says Loanna. "If you're only spending four days a week in London, you can rent a room somewhere or stay in a hotel."

"You don't have to bring your family with you everywhere. Other people who go away for work don't need a second home.

"Should people who abuse public money to enrich themselves go to prison?" asks another resident.

"I absolutely agree with that," she replies. "We are bringing in a system where the public will be able to get rid of an MP who has abused the system or had some kind of misconduct. The people, under a Conservative Government, will be able to get rid of that MP and I think that's progress because it means we have to be directly accountable to the people who voted us in."

A Waterloo resident wants to know whether the Tories will protect London jobs by ensuring that Crossrail goes ahead.

"I think Crossrail is a very good idea and it will bring jobs to the locality. If people aren't mobile they can't get jobs. On the other hand it is unrealistic to say that right this minute we can find the money to invest in such a huge project.

"We have to be realistic and decide how to proceed with this project. Shall we start slowly or shall we wait until the money is rolling back in to the Treasury so we have that investment to make?

"If we start doing projects like that now when the economy is in such a bad state, we'll have to borrow again. That's what we're trying to get away from."

An Elephant & Castle resident asks about the candidates' views on the controversial Digital Economy Act.

"I haven't really been involved in this," says Loanna. "I really can't give an opinion on something I haven't thoroughly researched. Since I don't have that sort of information at my disposal I'd hate to make a statement that comes back to haunt me.

Several questioners are concerned about the environment. David Cameron's gone a bit quiet since his 'vote blue go green' days. Where does Loanna stand?

"As everyone knows, since the climate-gate emails there's been some shift in people's attitudes towards climate change, and no-one is quite sure any more whether it's really happening or not.

"As individuals and as a society we need to think about the future, even if the climate isn't changing we are already wasting too much of our resources and people need to take personal responsibility."

A Cathedrals ward resident asks what their MP can do to tackle knife crime.

"We're going to cut the red tape and the bureaucracy that's keeping policemen tied to their desks so that they can be freed up to go back on the streets.

" I personally want to see us having a small police base in each ward so that they can respond quickly to antisocial behaviour or crime and get to know the area and the troublemakers.

"I want to see the education system challenge kids better and provide more careers advice and more support and give them something that will keep them occupied when they are out of school.

"I think the National Citizens Service is going to be quite a turning point in young people's lives. Once you've been away from home and done something really challenging in a different environment you see how much you can do. It builds your confidence and gives you a different view on life and the possibilities that you can achieve."

She also believes in stronger sentencing: "We need to send a message to young people that if you carry a knife and get involved in knife crime that you are going to be punished.

"Some people say that we should give them a community sentence and get them to clear up graffiti but I don't think that's strong enough."

A South Bermondsey resident complains that politicians ignore single middle-aged people in all their rhetoric about hard-working familiies, young people and pensioners. How does Loanna respond to that complaint?

"People like that will have opportunities to start their own businesses. I want to see tax breaks for them.

"It really annoys me that this Government waits until you are on the ground before they help you. I want to see people helped not to get on benefits ..."

A Bermondsey resident asks what their MP can do to improve the local postal service.

"We've just been trying to get our leaflets out across the constituency to the 70,000 homes and believe me, I've had several complaints that either one home is getting too many leaflets or a home isn't getting any at all, so I sympathise with the person who says we need to improve the postal system.

"Because we're going to allow local people to get more involved in their local services, if something like the Post Office isn't working well, then communities and local people can get together and take over some of the services and make it work better."

How would a Conservative MP support the regeneration of Elephant & Castle?

"The regeneration project is very dependent on large firms having the money – or being able to borrow the money – to make it happen quickly.

"At the moment most of it has stalled because we're in a recession. I think the regeneration is inevitably going to take some time because we have to wait for the economy to pick up and the will to complete it."

She calls for tax breaks for small businesses and an end to Labour's so-called "jobs tax" to stimulate the local economy.

What would the Tories do about youth unemployment?

"We're introducing another 400,000 apprenticeship schemes for young people, and on top of that we're going to do 200,000 mentoring programmes which means that young people will be attached to someone in work for 6 months.

"There will be lots of assistance and careers advice to help people get on the jobs ladder. There are other services that we are putting together like the fast-track Teenage Job Club to groom and encourage and prepare young people for opportunities that are going to be presented to them."

A resident wants to know what the candidates believe to be the most important issue for their constituents that an MP can actually do something about, and what they would intend to do.

"I did a survey when I was selected as a candidate a year and three months ago in Chaucer and in Surrey Docks ward to find out what was at the top of people's agenda.

"The way we're going to tackle this is to get police back on the streets. If police aren't doing what they are supposed to do, and doing it effectively, then we can't combat this problem.

"The second thing that I find is uppermost in people's minds across the constituency is regeneration, planning and the loss of green spaces. Every ward I go into this is a major issue.

"It's difficult to see what an MP can do as the power for these things is in the hands of the local council. So the more Conservatives we have on the local council, the more power we will have to do something about stopping selling off these spaces.

Is Bermondsey a stepping stone to a safe seat?

Bermondsey isn't traditionally an area where Conservatives have found favour. Is it demoralising to be campaigning in an area without much hope of success?

"Not at all," says Loanna. "The first question is 'Where have you been? Why haven't the Conservatives been fighting all along?'

"I have to explain that I've only just arrived. In fact they're right. The Conservatives have never really fought for Southwark. When I was a Rotherhithe council candidate people were surprised.

"I've lived in Southwark for 15 years and I've seen the changes. The demographic has changed quite dramatically since I arrived. When I moved in to Bermondsey this was an even poorer area than it is now. It's improved over the years and the Liberal Democrats have done quite a good job.

"Nobody is entitled to be in the same job for ever. Simon Hughes has been here for 27 years. Sooner or later there has to be a change, even if it's just because he's dead.

"I haven't come into this for any kind of self-gain. If I don't win I don't win. But there's always another election.

Would she be looking for a safe seat next time? "No! No!" she replies. "I'm not interested in a safer seat. I'm interested in Bermondsey and Old Southwark. This is where I understand. The issues here are what concern me.