Work began last week to excavate an historic vault in the eastern churchyard of Southwark Cathedral. It will be used for the reburial of human remains disturbed by the Thameslink viaduct works. 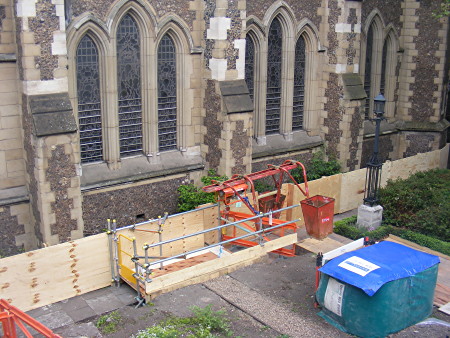 Bishop Lancelot Andrewes (1555-1626) was once buried in the vault but he was disinterred and reburied within the cathedral in the early 19th century and the chamber was filled with earth.

Network Rail contractors and cathedral archaeologists are now clearing the vault which will be used for the reburial of human remains disturbed by the construction of the new Thameslink railway viaduct through Borough Market.

Human remains unearthed during the creation of The London Bridge Experience will also be placed in the vault.

Once the works are complete the cathedral is planning to hold a service to dedicate the vault as an ossuary – a grave for skeletal remains.

Screens will be placed around the vault during the month-long project when necessary to ensure dignity during the examination of remains.

Meanwhile the recent demolition of buildings in Borough High Street – in preparation for the Thameslink viaduct – has temporarily opened up new views of Southwark Cathedral from the south-east.