The 'Lady of the Lamp' returns to the South Bank this month as the Florence Nightingale Museum opens its doors once again following a £1.4 million redevelopment. 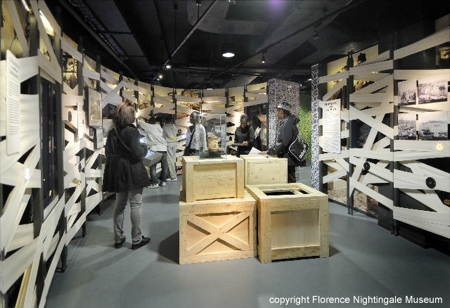 The new-look museum was designed by Dutch architects Kossman Dejong, who won a competition to redesign the space to mark the centenary of Florence's death. It features three separate areas representing her early years growing up in an upper-middle class family, her experiences nursing soldiers during the Crimean War and her later work as a campaigner for health reform.

Museum director Caroline Worthington said the museum has undergone a complete transformation. "We've completely opened up the space into three pavilions, telling the story of Florence on the inside of each pavilion and giving the historical context on the outside," she said.

"The lead designer has a background as a theatre designer and we have worked together on the content, but the design has remained unchanged since the original pitch."

The pavilions feature some of the museum's collection of 'Nightingalia', along with interactive displays, and visitors can use a pair of stethoscopes to activate hot spots to listen to the recorded audio tour.

The 'Gilded Cage' pavilion takes visitors through Florence's privileged upbringing and her struggle against the stifling social conventions of Victorian England, with displays including the writing slate she used as a child and her pet owl Athena, who travelled everywhere with her in her pocket.

The next pavilion, 'The Calling', charts her time in the Crimean war and her handwritten Register of Nurses, which lists the women who served under her in the military hospitals, has been made into a digital display where visitors can read her no-nonsense comments about her staff.

Nurses at the time had a reputation for drunkenness and a somewhat casual attitude towards patients and Florence worked hard to change this, with the register showing she dismissed quite a few for intoxication.

In another entry she describes a widowed nurse named E. Hawkins as "strictly honest and kind, not strictly temperate which she struggles hard to overcome", giving you an insight into the challenges she faced in transforming the profession.

The final pavilion, 'Reform and Inspire', shows her groundbreaking work as a campaigner for health reform at home and abroad, the effects of which are still evident today in areas like hospital ward designs and infection control measures.

"It is fascinating to see that the issues she tackled, such as hospital hygiene, caring for soldiers and the training of nurses, are still hugely relevant today," said Caroline.

The museum is in the grounds of St Thomas' Hospital on the site where the visionary Victorian nurse established her first training school and will be open later this weekend as part of the 'Museums at Night' initiative.