The Bankside 123 development - which includes the Blue Fin Building - has won a prestigious award from the Royal Institute of British Architects. 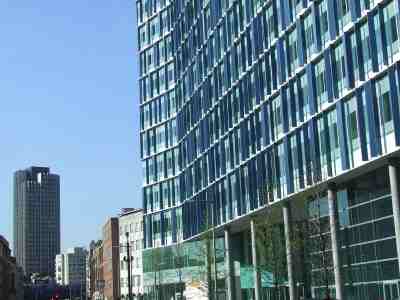 Land Securities' Bankside 123 scheme – designed by Southwark architects Allies and Morrison – is one of 30 recently completed London projects to receive an award for architectural excellence.

Building 1, which is occupied by IPC Media, is now better known as the Blue Fin Building. The Royal Bank of Scotland is the tenant of buildings 2 and 3.

"Building 1 is much the best of the three (the others were fitted out by the client)," said the RIBA judges in their citation.

"Known as the Blue Fin due to the 2,000 blue aluminium fins making up the facade, they work like leaves on trees providing dappled solar shading without taking out too much indirect light and breaking up the facade.

"The internal spaces are arranged around a dramatic central atrium with a series of open bridges crossing at each floor level, so the movement of people around the building is clearly visible.

"For such a large building it is well mannered and provides a high benchmark for commercial architecture."

This is not the first award that Blue Fin Building has received. In 2008 the British Council of Offices said that the building raises the spirits of all who visit it. However, in the same year the building was shortlisted for Building Design magazine's Carbuncle Cup. Architect Christopher Woodward said that the development "represents the end of civilisation".

"I am delighted that the completed Bankside 123 project has won a 2010 RIBA Regional Award," says Paul Summerlin, project architect for Bankside 123 at Allies and Morrison.

"For us this marks 10 years since we first began working on the transformation of the site with Land Securities.

"Our own offices are in Southwark Street, across the street from Bankside 123, so we are amongst those who benefit from the new vibrancy brought about by the users of these buildings and the visitors to their public spaces."