More details of the timetable for the removal of the southern roundabout at Elephant & Castle have been released by Transport for London, as well as an image showing how the new junction will look. 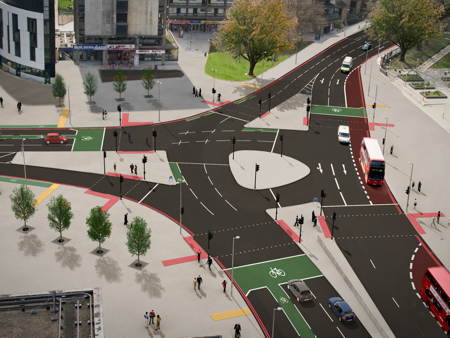 The current roundabout at the junction of Walworth Road and Newington Butts will be converted to a junction with traffic signals and surface-level pedestrian crossings.

Preparatory work started back in February, and the main work is about to begin.

The chosen layout is less elegant than the Space Syntax design which was preferred by Southwark Council but vetoed by TfL.

Engineers have redesigned the junction to ensure that it will be able to manage traffic levels, while also delivering improvements for pedestrians and cyclists.

As part of the project the existing subways underneath the roundabout will be filled in by TfL and replaced with new surface crossings.

The new crossings will make it easier for pedestrians and cyclists to cross the road, as well as help manage traffic through the area.

Work to remove the subways will begin after the roundabout has been converted, with the subways closed to the public by the end of the year.

"The start of the physical work to remove this archaic monstrosity from the streets of Southwark is a big step forward in the regeneration of Elephant & Castle," says
Kulveer Ranger, the Mayor of London's transport advisor.

"A signalised junction will help improve the flow of traffic through the area and I think local people will be delighted to be able to cross the road without having to use the pretty unpleasant subways that are there at the moment. This work is a great example of the Mayor's drive to improve the appearance and feel of the Capital."

"These works link directly to the entire Elephant and Castle regeneration project, which includes massive improvements to the transport infrastructure of the whole local area," says Anne Lippitt, Southwark's strategic director of regeneration and neighbourhoods.

"We're working closely with TfL to create better, safer routes for cyclists, pedestrians and public transport. We're delighted to see the works beginning, as part of one of the biggest regeneration projects in London."

TfL is continuing to work with Southwark Council and Lend Lease to discuss the long term regeneration of Elephant & Castle.

TfL's 2009 feasibility study into the long term transport needs of the area identified the need for major capacity improvements to the Northern line ticket hall, a better bus interchange and changes to the northern roundabout.

• TfL has launched a new set of web pages to provide updates on the Elephant & Castle project: www.tfl.gov.uk/elephantandcastle