Will London Bridge lessons be learnt for Waterloo Station works?

The rail minister and his senior civil servant have pledged that lessons from the rebuilding of London Bridge Station will be applied during the forthcoming major works at Waterloo Station. 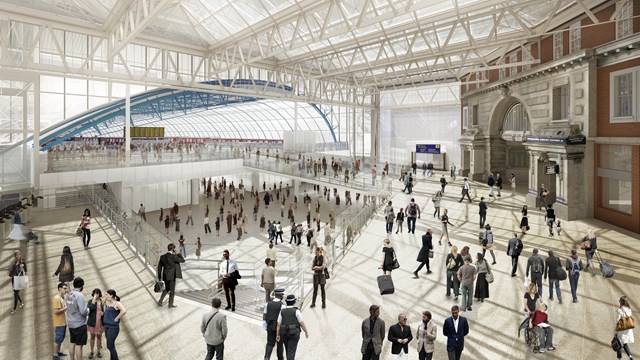 Works are planned at Waterloo Station to extend platforms 1 to 4 to take longer trains and to enable the former Eurostar platforms to be used by commuter services.

The rail minister appeared before the House of Commons transport select committee on Monday to answer questions about works at London Bridge and Waterloo and their impact on the performance of the rail network.

Committee chair Louise Ellman MP began by noting that the rebuilding of London Bridge Station was forecast to cause 10,000 additional 'delay minutes' per year, but in reality train operators racked up that many delays each week.

Rail minister Paul Maynard MP told MPs: "It is very important that we understand why that occurred, not least because we are going to be seeing significant works at Waterloo coming up at at the same time as we are renewing the franchise there.

"It is very important that we understand what didn't work first time around to make sure we don't make the same mistakes now when we have to deal with Waterloo."

Asked if he was confident that problems at London Bridge won't be echoed at Waterloo, the minister replied that bidders for the new South West franchise would be expected to demonstrate robust plans to cope with the work.

Peter Wilkinson, the civil servant in charge of rail franchising, denied that he had personally miscalculated the impact of the London Bridge Station works.

He said: "I do share the committee's absolute concern that the lessons from London Bridge must be learned and we must make sure that they are not repeated both in relation to the programme coming up at Waterloo but also of course whatever comes out of HS2 at Euston as well.

"We really must learn these lessons."

Pressed by Louise Ellman as to whether the Department for Transport had learnt the lessons, he conceded that "we've still got work to do" to put in place clear divisions of responsibility between Network Rail and the train operator to minimise the impact on passengers during the Waterloo works.

Stuart Kistruck, route managing director at Network Rail, said, "Work to deliver our Railway Upgrade Plan at Waterloo is progressing at a fantastic rate and this will continue behind the scenes, but from August 5 to 28 next year we will temporarily shift all of our services along the station so that we can lengthen platforms 1 to 4.

"During this period we will be closing platforms 1 to 9, so services will use the other existing platforms as well as platforms 20 to 24, which will re-open during August's changes. As there will be major impacts on services, we want everyone to have plenty of time to plan ahead while we invest for better journeys down the line."

Christian Roth, managing director of South West Trains, added: "We are doing everything we can to minimise the impact on passengers while the work is carried out but there will be some changes to services next summer, particularly between 5 and 28 August 2017. We are urging passengers, businesses and communities to start planning ahead now while we carry out this work."