Magic treatment for children with motor disorders at Guy’s Hospital

Three ten-day 'magic camps' have been held at Guy's Hospital this summer to help improve children's motor skills and confidence by encouraging them to practice therapeutic hand and arm movements in a fun and challenging way. 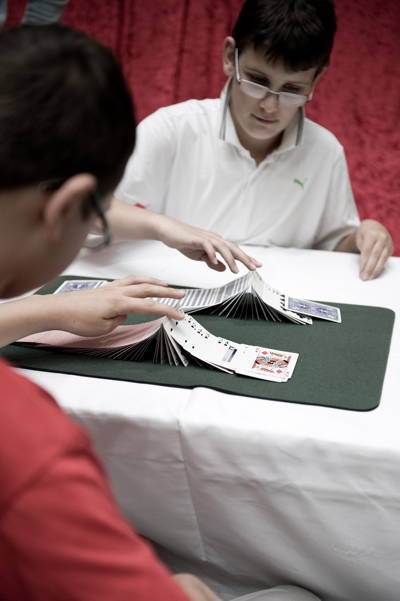 Guy's and St Thomas' Charity has funded the events for children with upper limb motor disorders.

The camps use tricks developed with the help of magicians from the Magic Circle.

Children with motor disorders like hemiplegia or paralysis on one side of the body have to perform routine exercises to help them improve their ability to carry out basic actions, such as doing up a zip or fastening a button.

Normally they need a lot of practice to recover lost skills or acquire new abilities, which can be tiresome and monotonous. The magic hand tricks aim to increase their interest and motivation in therapy sessions, whilst improving their functional skills and confidence.

Denise Pittaway, mother of Katie O'Connor, 11, who attended the first magic camp at Guy's Hospital, said: "Katie's become much more aware of her left hand; before, she would just let her hand hang there, now in certain situations she's using it more and she's much more aware of it feeling tight or loose. She's also willingly wearing her hand splint in bed, which she refused to wear up until now

"There's a magic trick in which she has to manipulate her fingers that she's found particularly difficult, but she's commented that if she wears her hand splint, it'll make it easier for her to do the trick. So it's really positive! She's also thoroughly enjoyed the camp and it's been great for her confidence too."

During the camps the children not only learn new magic tricks, they also get taught circus skills and balloon modelling, play card and board games, design and make their own magician's costume and prepare their own lunch using a knife and fork.

All the activities have been developed to exercise the affected limbs, using both hands, without the children even realising they are doing exercises.

The magic camps follow on from a pilot project funded by the charity in 2008 which engaged magicians from the Magic Circle to work with occupational therapists from the Evelina Children's Hospital to develop a series of simple magic tricks that replicate the movements taught in conventional therapy sessions.

The project helped to make therapy sessions more enjoyable and encouraged patients to keep practising their exercises when they left the hospital.

"Most children have demonstrated markedly improved hand skills following the camp, in terms of spontaneous use of the affected limb, strength, grasp, ability to release, and the timing and coordination of their movements," says Amarlie Moore, paediatric occupational therapist at the Evelina Children's Hospital.

"One child, for example, tended to avoid using her hand at all, and would always request help for tasks requiring two hands. During the camp the strength and coordination of her affected limb have improved dramatically and she now uses it spontaneously. This means she can now use a knife in one hand and a fork in the other to eat, and carry a tray with two hands – actions she was unable to do before."

Now an international research project is being undertaken in collaboration with the Ichilov Hospital in Tel Aviv, Israel, to formally test the effectiveness of 'magic therapy' to enhance conventional occupational therapy programmes for children with motor disorders.

The study comprises an assessment of all the participants two to four weeks before the camp starts, at the very start of the camp and at the end of the camp to measure their progress. There will be follow-up assessment at three and six month intervals after the camps have finished in order to assess the impact of the programme.