Plans to replace an empty office building on Waterloo Road with an 8-storey 146-room student residence were approved by Southwark's planning committee on Tuesday night. 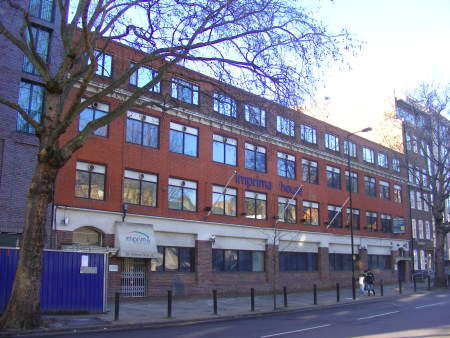 In February we reported on plans by Unite to demolish Imprima House and replace it with student accommodation designed by local firm HKR Architects. There is an existing planning permission for a new 7-storey office building on the same site.

On Tuesday night the application was considered by Southwark Council's planning committee.

The room was packed with local residents who had come to oppose the development. The council had received 49 objections to the planning application and a petition with 175 signatures.

Introducing the application, planning officer Yvonne Lewis said that the loss of the office space in Waterloo was regrettable but not surprising given the state of the London office market.

She said that it was difficult to dispute the evidence provided by Unite that there is a need for more student accommodation.

Ms Lewis added that she understood neighbours' concerns about the proliferation of accommodation for transient residents – the H10 London Waterloo hotel is next door and London South Bank University's 621-room McLaren House is across the road – but said that there was no clear evidence of antisocial behaviour associated with the existing premises.

Clive Chenery, a committee member of the Dodson and Amigo Tenants' and Residents' Association, spoke on behalf of the objectors.

He said that the student residence would represent 'overdevelopment' and would lead to loss of light for residents in Dodson Street.

Mr Chenery told the committee that residents have suffered noise and disturbance from the construction and operation of the H10 London Waterloo hotel. He showed pictures of the poor state of the surface in Dodson Street and the linen lorry which wakes residents each morning when it arrives at the hotel.

"The residents have had enough," he said, to applause from the public gallery.

He also spoke about the problems caused by summer lettings at nearby McLaren House, and said that foreign students had been seen drinking alcohol in a children's playground.

The committee was also told of instances of students urinating and having sex in public areas.

Asif uz Zaman from Unite Group explained that his company is the largest operator of student housing in London. "We don't just build and walk away," he said.

He said that Unite has invested more than £150 million in the borough of Southwark and has a long-term commitment to the area.

The committee heard that Southwark has 24,000 full-time students but only 4,000 places in purpose-built student accommodation.

"This is good news for Southwark," he said, adding that residents should welcome the students because of their "youth and eagerness".

Mr uz Zaman also told the committee that Unite estimates that the residents of its proposed Waterloo Road development will spend as much as £1.1 million a year in local shops.

Having heard Unite's assurances about management of its residences, Cllr Neil Coyle asked how many students had had their tenancy agreements terminated because of antisocial behaviour.

Neville Snell, Unite's operations director for London, said that about 50-60 students had been thrown out of the company's residences in the last year. Unite currently houses 5,000 students in the capital.

Further questioning from members of the committee established that any complaints from residents about antisocial behaviour in Southwark would be answered by a call centre in Bristol which would then pass a message to a mobile security team covering the whole of South London.

The committee was addressed by Cathedrals ward councillors Adele Morris and David Noakes who outlined their concerns about the application.

She pointed to statistics which show that Cathedrals ward has one of the highest concentrations of student accommodation in London.

"The Mayor says that there's a strategic need for student accommodation: putting them all in one ward isn't strategic," she said.

Cllr David Noakes added: "We can't house all the students in the borough in our ward."

Cllr Noakes also reminded the committee of the council's planning policy which requires applicants wanting to build student housing to demonstrate support from a local educational institution. In this case the supporting letter comes from the University of Westminster, which Cllr Noakes said could not be regarded as local.

Cllr Morris stressed the wide coalition of local residents who had come together to oppose the Unite appliccation: "We're not talking about a handful of NIMBYs," she said.

Pressed by Cllr Nick Dolezal to provide firm evidence of disturbance to local residents that could be linked to existing student accommodation such as McLaren House, Cllr Morris said that a lot of low-level antisocial behaviour was not formally reported to the police or council because people had low expectations about any action being taken.

"People don't report things that are not extreme because there is not a cat in hell's chance of [the police] doing anything about it," she said.

This comment drew a sharp reaction from planning committee chair Cllr Althea Smith, who said that she was good friends with the local police and didn't believe that Cllr Morris should criticise them in this way.

In a heated exchange between the two councillors, Cllr Morris replied that she believed that Cllr Smith was allowing her friendship with the police to prejudice her role as chair of the committee.

Cllr Morris says that she will be making a formal complaint about Cllr Smith's outburst.

The two Cathedrals ward councillors were applauded from the public gallery for their representations to the committee.

After further discussion the committee voted 4-2 to approve the planning application.