Akash Bhatt has been chosen as the winner of a competition organised by Network Rail and the Bankside Gallery to find a new art work to display on the hoardings on the eastern side of Blackfriars Bridge. 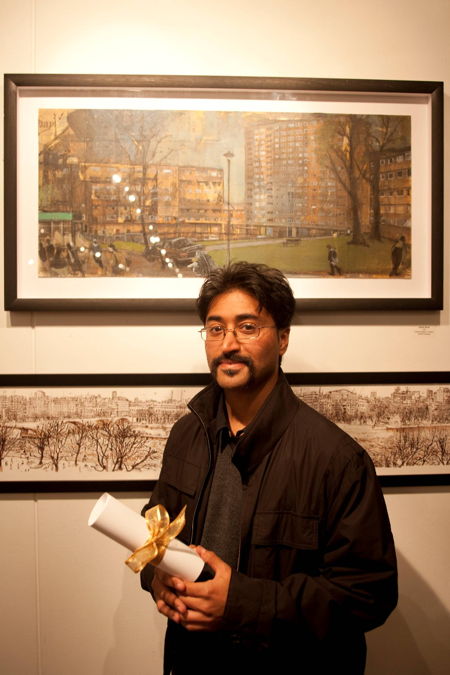 Akash Bhatt with his winning painting

In June Network Rail launched a competition to find a new piece of art to brighten up the 246-metre hoarding which encloses the Thameslink Programme building site at Blackfriars.

The winning image, Life, was painted on used newspapers and shows a Wembley estate.

The painting received the gold medal in the the first London Lives art competition which asked artists to explore and celebrate the concept of London and capture what it means to them.

Akash's work is part of a public exhibition of the top 100 works submitted to the competition.

"It's great to win an award like this and to be part of a new competition that gives young up-and-coming artists the chance to have their work included in public selling exhibition," says Akash Bhatt.

"As an artist exhibition space is often limited and sometimes very costly, so it's nice to see that national organisations such as Network Rail can get behind these types of initiatives.

"My painting Life depicts people I saw over several days coming home from work near where I now live in Wembley. I don't paint flowers and am more interested in the characters I see every day, but in stirring settings. I believe my painting captures a view of 'London Lives' that a lot of people will recognise."

Cancer Research UK will receive a donation for each work sold at the London Lives exhibition.

Network Rail is currently rebuilding Blackfriars Station which will have entrances on both sides of the river. Simon Hughes MP has called for the station to be renamed Blackfriars & Bankside to reinforce the station's cross-river status.