The farmers' market at the Elephant & Castle had a quiet start when it opened for its first day at 9am on Saturday. 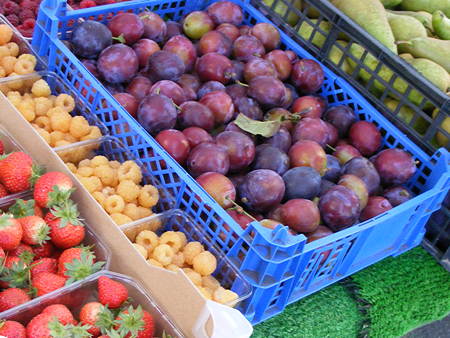 During the morning many people heading for the shopping centre seemed surprised to see stalls outside the London College of Communication.

The new market attracted ten stalls for its launch. Traders were keen to stress that they were from all from either within the M25 or in the Home Counties.

Nut Knowle Farm in East Sussex, run by husband and wife Lyn and Jenny Jenner and specialising in goat cheese, displayed its award-winning St George Cheese. The mature camembert-type cheese was a winner in the BBC2 Full on Food programme.

The Giggly Pig Company, whose meat is supplied by a farm at Upminster, has an opening offer on its sausages which can be frozen for up to six months.

Other stalls were selling Polish cakes, fruit and vegetables from Newington in Kent and rare breed meat from Romney Marsh.

Flour Power City, known for its bread stall at Borough Market, has also joined the market. More stalls are expected early next month.