Riders using the Barclays Cycle Superhighway at Elephant & Castle were given the chance to get in the cab of a lorry to learn how to make themselves visible to truck drivers on Wednesday morning. 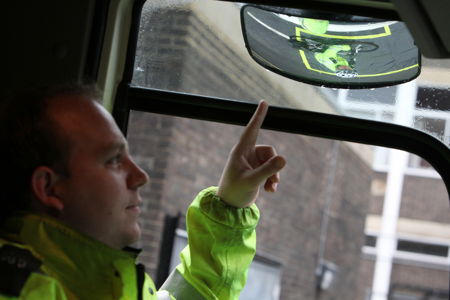 A road safety officer points out the challenges of spotting cyclists alongside large vehicles.

Cyclists were encouraged to take a seat in the cab of a Keltbray tipper truck to learn about the blind spots where drivers of large vehicles can't see other road users.

The event was held at the corner of Keyworth Street and Ontario Street next to London South Bank University and a stone's throw from the Elephant & Castle.

The location is close to the Merton to Southwark Bridge Barclays Cycle Superhighway.

"As a Southwark resident who's just completed a cycle safety training course, I do find it alarming the number of cyclist casualties that involve heavy goods vehicles," says Cllr Barrie Hargrove, Southwark's cabinet member for transport, environment and recycling.

"A massive factor in collisions of these kinds can be put down to the lack of awareness of both cyclists and large vehicle drivers of each other.

"Anything we can do to create a better understanding of other road users will help here and I hope many people take up this offer of free training."

Of the people injured on Southwark's roads, 18 per cent are cyclists and the vast majority of these are males aged between 25 and 59.

Two cyclists have died on SE1 streets this year after collisions with lorries: Professor David Vilaseca was killed in Tower Bridge Road in February and Muhammed Haris Ahmed died at the junction of Weston Street and Snowsfields the following month.