Network Rail has effectively kicked plans to rebuild Waterloo Station with a concourse at ground level into the long grass by revealing proposals for a new high-level shopping balcony above the concourse. 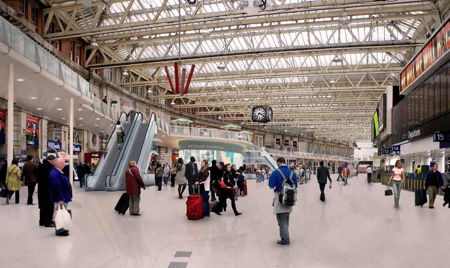 The proposed balcony would be built along almost the full length of the concourse at first-floor level.

Shops and cafes which are now in the middle of the concourse would be moved into 20,000 sq ft of converted offices alongside the balcony.

This would create significantly more space to circulate at concourse level.

The balcony, which would be accessible by escalators, lifts and stairs, would also improve the connection between Waterloo East and Waterloo mainline stations.

Network Rail says that the proposed design is inspired by the contemporary and uncluttered style used at St Pancras International.

"With this number of passengers the station can become very busy, particularly at peak times.

"By creating this new balcony we can give people more space to move around the concourse as well as providing the convenient and wide-ranging retail facilities and eateries that people want at busy mainline stations.

"Rising passenger numbers means the industry has to look hard at congestion and overcrowding, both on trains and at stations, to enable a larger number of people to make journeys by train.

"This investment will be an important early step in our long-term plans to boost passenger capacity at Waterloo."

The recent decision by culture minister John Penrose to decline an application for the listing of Waterloo Station has cleared the way for Network Rail's proposal.

If approved by Lambeth Council, the new shops and cafes could be open by 2012.

The balcony plan represents an acknowledgement that Network Rail's stated ambition for a wholesale rebuilding of Waterloo Station with longer platforms and a ground-level concourse, to be partially funded by high-rise development above the station, is not likely to happen in the next few years.

Network Rail insists it is still committed to more radical plans for the transformation of Waterloo but the new balcony will help to ease congestion on the station concourse in the more immediate future.

Meanwhile the former Eurostar terminal at Waterloo continues to lie idle more than three years after the last train served the station.