Annie Lennox was joined by Cherie Lunghi, Bianca Jagger, Jude Kelly and Helen Pankhurst for the release of doves from the Millennium Bridge to mark International Women's Day. 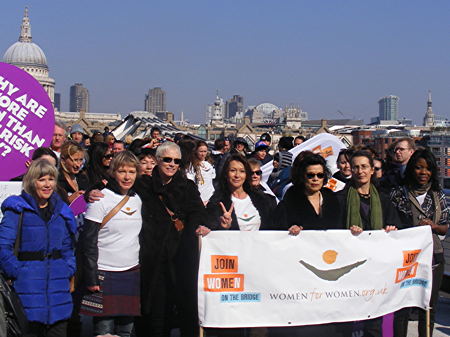 This year's second annual 'Join me on the Bridge' campaign also marks the centenary of International Women's Day.

This year, Women for Women joined forces with a coalition including International Soroptimists, the WI, the National Union of Students, Amnesty International, the Fawcett Society, Oxfam, Women's Aid, CARE, Save the Children and the White Ribbon Alliance.

Annie Lennox led a march from Borough Market along Bankside to the Millennium Bridge and along the north bank to Victoria Embankment Gardens. The march then returned to the South Bank for speeches outside the Royal Festival Hall.

The gathering on Millennium Bridge was one of a series of events on bridges in more than 42 countries around the world.

"I'm honoured to be taking part in the Join Me on the Bridge campaign, standing strong with women around the world in demanding equality between the sexes – as my great-grandmother did 100 years ago," says Dr Helen Pankhurst, great-granddaughter of Emmeline Pankhurst and granddaughter of Sylvia Pankhurst.

"Building bridges between women and communities is vital. Women living in conflict need women in the UK to stand alongside them. When women stand together then we have greater impact; to end violence and bring about change in places like Afghanistan.

"Women in Afghanistan are our modern day suffragettes, standing up for their rights despite threats of violence. I am proud to stand alongside them today.

"Women in Afghanistan face physical hardships and levels of intimidation that would have staggered the Suffragettes. Even the smallest act of defiance by women in Afghanistan today can result in untold violence – from within and outside their own families. Their courage needs to be honoured by us all."