Southwark College gets go-ahead for florist, cafe & salon on The Cut

Southwark College built its new shops on The Cut without planning permission because it had to spend Skills Funding Agency cash by the end of March, the deputy principal told a council meeting last week. 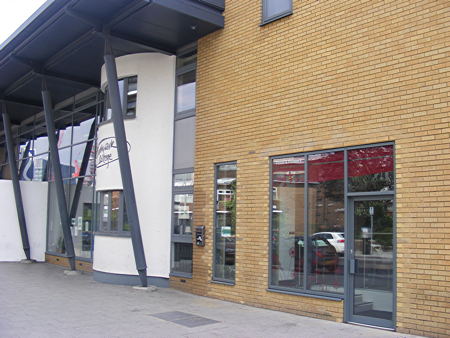 The new facilities include this "bistro-style coffee shop"

Borough & Bankside Community Council met on Thursday night to consider Southwark College's planning application to create a hair and beauty salon and combined bistro and florist's shop at its Waterloo Centre on The Cut.

Work to create the new shopfronts started at the end of last year even though planning permission had not been granted. The council's planning enforcement officers started an investigation but decided not to take action against the college until the outcome of the planning application was known.

The initiative to create realistic working environments for Southwark College students is part of a package of measures funded by Ł500,000 from the Ł4.4 million Shard Southwark Vocational Programme.

The meeting heard from traders in The Cut worried by the prospect of the college setting up in competition to existing small shops in the street, and from residents of Styles House concerned about possible noise and disturbance from the new shops.

Zoe Kennedy, representing Styles House residents, told councillors that neighbours had suffered noise and antisocial behaviour from college students in the past and that there were concerns that new shops open seven days a week would exacerbate the problem.

Sarah Coveney, whose Cutflowers florist's shop is just a few doors away from the new shops, said that the college had made no effort to communicate with its neighbours about the plans.

The Cut already has a florist's, more than one hairdresser and several coffee shops.

She explained that she had often given work experience placements to Southwark College floristry students, had trained at the college herself and was disappointed by the institution's "underhand" tactics.

"They should know the rules – the rest of us have to live by them," she said.

Community council chair David Noakes said that all councillors shared residents' "disappointment and annoyance" that the college had proceeded to carry out works without permission.

Deputy principal Phil Butler said that the new shops would be primarily training facilities rather than commercial endeavours, although they will be open to the public.

"These developments are part of eight new vocational areas that the college is developing to help people get the training and skills they need to gain employment," he said.

"It's to help employers in the borough to recruit locally. At the moment if you talk to the major employers like Mace they are recruiting from all around the region – 50 or 60 miles away."

The college is working with the future occupiers of the Shard – including Shangri-La Hotels – to provide training leading to job opportunities in the skyscraper.

Mr Butler added: "We're also working closely with the council on these training facilities to provide potential new work opportunities for redundant council workers as several hundred – or perhaps thousand – are being made redundant."

Councillors asked Mr Butler why it hadn't occurred to the college to consult its neighbours on the proposed new shops.

"We thought we'd done it," he said, before apologising for the "oversight". "We didn't do a good job on consulting," he conceded.

The planning application was approved with three votes in favour and one abstention.

Councillors imposed conditions to prevent the new shops from opening on Sundays and from placing chairs and tables on the pavement in order to prevent disturbance to local residents.