Peter Valuks, master of the Southwark Cathedral Society of Bellringers, has embarked on a 1,200-mile sponsored bike ride to raise money for the restoration of the bells. 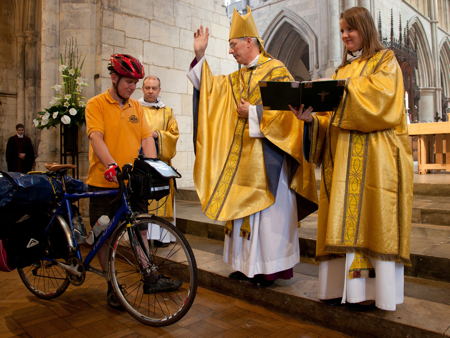 He received a blessing from the Bishop of Southwark, Rt Revd Christopher Chessun, on Easter Sunday morning before heading to Cornwall for the start of his ride.

Valuks is cycling on his own, carrying a tent to sleep in and does not have any logistical support. The cycle ride started at Lizard Point in Cornwall, will visit Land's End and John O'Groats and finish at Duncansby Head. The idea of the ride is to visit the furthest points on the British mainland to the south, south-west, west, north-west, north and north-east.

He visited the south-east and eastern points of the British mainland on his warm-up ride in mid-April.

Southwark Cathedral bells are one of the oldest, heaviest and most challenging rings of 12-bells hung for English-style change ringing. They were cast and hung in 1735 by Samuel Knight.

The heaviest bell, or tenor, weighs 48cwt (2,438kg or nearly two and a half tonnes). This makes it the seventh heaviest tenor bell in the world.

The last major work to be carried out on the bells of Southwark Cathedral was in 1965 when the lightest six bells were re-hung on modern fittings.

With regular use the fitting are now worn out and it is now necessary to replace them and re-hang the bells.

Valuks, who works for the Financial Times at Southwark Bridge, is raising money towards the estimated Ł100,000 cost of this work.

The FT is matching the first Ł1,000 of sponsorship raised by the cycle ride. At the time of writing he had raised more than Ł4,400.

• Follow his progress on his blog or sponsor him at Virgin Money Giving.