Studio at the Elephant brings art to the shopping centre

Two local artists have set up a temporary studio at the Elephant & Castle Shopping Centre. 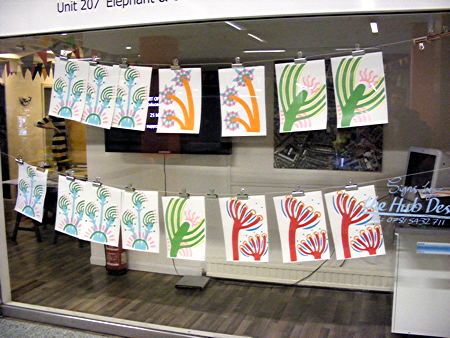 Studio at the Elephant is run by Rebbeca Davies and Eva Sajovic and follows on from last autumn's Elephant and Castle Project.

This time the duo has taken over the former Southwark Council regeneration office on the first floor of the shopping centre.

The studio has an 'open door policy' on Tuesdays and Wednesdays when the public can come in, have a cup of tea and talk to the artists.

Davies says: "My art involves the public... I want this to accessible to them."

The space is permanently occupied by Davies and Eva Sajovic. However, many artist work at the studios on a temporary basis and Davies asks them to all give workshops in their different mediums.

Although the Elephant & Castle Project was a big hit, "Two weeks was too short," says Rebecca. "It wasn't long enough to gain a presence."

"Having grown up in the area I'm happy to be home and to be working here in such a public place," she explains.

Davies and Sajovic have also received much support from the other businesses in and around the shopping centre. Mamuska! and Distriandina provided them with food for the gallery opening, Tesco allowed them to use some of their space to host a puppet show and Bloomingdales are currently letting them use the internet.

One of their works for the future will be a photographic trail which the public can follow around the businesses of the shopping centre and Newington Butts.

The shopping centre's owners St Modwen have previously allowed the Royal Court Theatre and Janet and John Mosaics to make creative use of empty spaces.

• Check out the Studio at the Elephant blog and calendar for further details.