A film company with offices at Southbank House in Black Prince Road was last week presented with the Social Enterprise Mark by Vauxhall MP Kate Hoey. 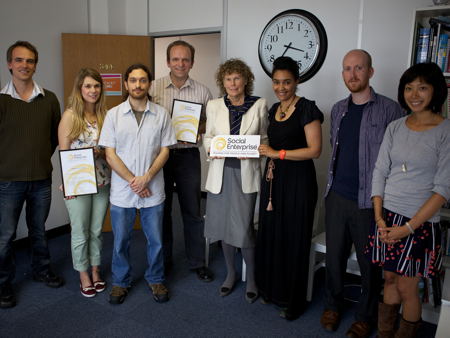 "Chocolate Films has been a social enterprise since it was launched in 2003," says director Mark Currie.

"Our films have always dealt with social and environmental issues, and we have always run video workshops for disadvantaged young people. We are honoured to be the first film or video company in either London or Manchester to receive the Social Enterprise Mark.

"This independent certification recognises our unique business model and is a clear indication of our future intentions."

Chocolate Films' current projects include a film about the refurbishment of the Ethelred Estate in North Lambeth, a documentary about street violence in European cities, a documentary-workshop project for homeless young people and a filmmaking project for children at risk of exclusion in a North London school.

"We are delighted to welcome Chocolate Films as the first film and video production company in either of the UK's main production hubs (London and Manchester) to receive this award and have no doubt they will inspire others to follow this great example of social enterprise," said Lesley Foster from the Social Enterprise Mark Co.

Existing holders of the Social Enterprise Mark in SE1 include Waterloo-based Southbank Mosaics.