Jubilee Gardens revamp ‘on schedule’ for 2012

The team behind plans to transform the South Bank's Jubilee Gardens in time for the Queen's Diamond Jubilee and the Olympic Games says that the project remains on schedule, following the announcement of the preferred bidder for the construction contract. 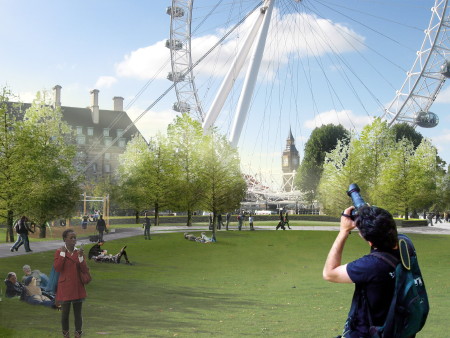 Frosts Landscape Construction was this week named as the preferred bidder for the Ł3.2 million construction contract for the high-profile scheme.

Lambeth Council granted planning permission for the much-delayed scheme in December 2010. Under the design by landscape architects West 8, Jubilee Gardens will be transformed from a flat expanse of grass to a lush, green park with flower beds and more than 70 new trees.

The announcement of a preferred bidder follows a competition under European procurement rules in which seven shortlisted companies were invited to submit tenders.

Subject to the final stages of the procurement process it is expected that a contract will be let and work will start on site in September. The contractor will be working to a very tight schedule to get the park ready for a busy summer of public events in Central London.

TfL's funding is conditional on the scheme being completed in time for the Olympic Games.

Other funding is from Shell (Ł1.35 million) and the London Eye under planning agreements with Lambeth Council, as well as contributions from several charitable trusts.

Jubilee Gardens was created to celebrate the Queen's Silver Jubilee in 1977 but the space has had a chequered history, with much of the park closed for several years as part of the Jubilee line extension project. If the project keeps to time the new-look park will be open in time for the Diamond Jubilee festivities in May 2012.