A plaque honouring volunteers from Southwark, Bermondsey and Camberwell who fought on the republican side in the Spanish Civil War has been relocated to John Harvard Library. 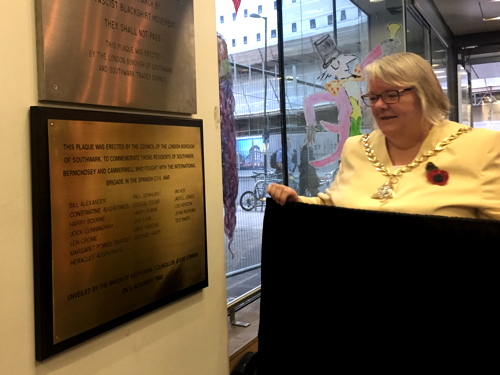 Cllr Kath Whittam unveils the plaque in its new location 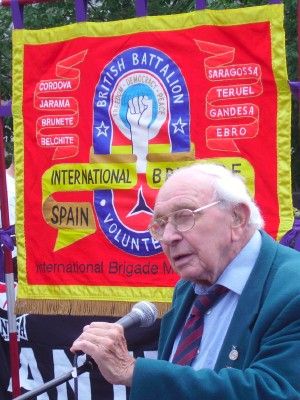 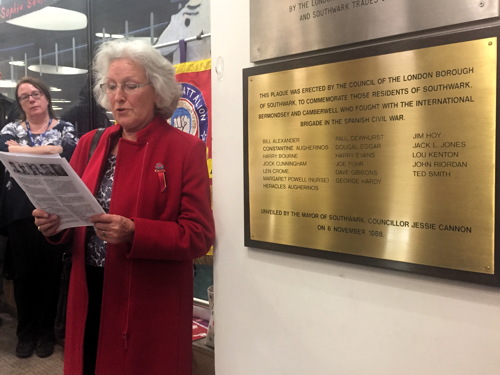 Between 1936 and 1939 2,500 volunteers from Britain, Ireland and the Commonwealth travelled to Spain to fight alongside Spanish republicans against the right-wing uprising led by General Francisco Franco.

One in five of those volunteers did not survive the war.

30 years ago, on the 50th anniversary of the Spanish Civil War, a memorial was unveiled at the old Southwark Town Hall to honour the local people who joined the International Brigades.

The plaque bears the names of 18 men and women of the International Brigades with links to the three metropolitan boroughs – Southwark, Bermondsey and Camberwell – that make up modern Southwark.

Those named on the plaque include the well-known trade unionist Jack Jones who lived in Camberwell in later life.

The plaque has latterly been out of public view in the Mayor of Southwark's parlour at 160 Tooley Street.

On Tuesday, as part of commemorations of the 80th anniversary of the Spanish Civil War, the plaque was unveiled by Southwark mayor Cllr Kath Whittam in its new location at John Harvard Library in Borough High Street.

Library users were surprised to find the quiet broken by the the performance of a song from Dare Devil Rides to Jarama – a new play about the Spanish Civil War which is being performed at the Bussey Building in Peckham this week.

The International Brigade plaque has been mounted on the same pillar as the plaque recalling the 1937 gathering by 20,000 people in Southwark to oppose a march by Oswald Mosley's blackshirts.

The IBMT's national memorial to members of the International Brigade is located in Jubilee Gardens on the South Bank, and a commemoration is held on the first Saturday of July each year.

The last surviving Briton who fought in the International Brigades, Stan Hilton, died last week at the age of 98.