Farid Sarwari, who took Barack Obama on a tour of the Globe Academy in May, has achieved 12 GCSEs at grade A. 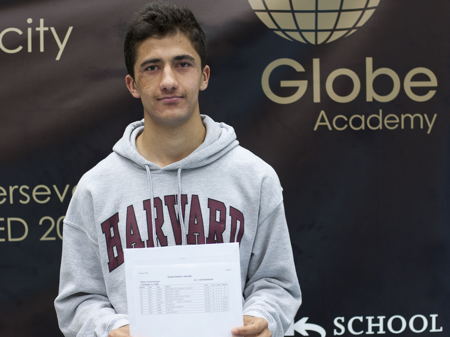 Farid Sarwari, who is Globe Academy's head boy, arrived in the UK from Afghanistan aged 9 speaking almost no English.

In May he was one of the pupils who greeted President Obama when he visited the Harper Road school during his state visit to the UK.

He has recently returned from a summer scholarship programme at the prestigious Phillips Exeter Academy in the United States.

45 per cent of students achieved at least 5 A*-C grades including English and mathematics, up from 42 per cent last year and just 26 per cent in the final year of Globe's predecessor, the Geoffrey Chaucer Technology College.

"Our pupils and their teachers have put in huge amounts of hard work to achieve these results so I'm pleased to see them rewarded," said Globe Academy principal Jason Baigent.

As principal of the academy I am very proud of how far we have come since opening in 2008.

"I'd like to congratulate our pupils on their tremendous achievements and to thank all our staff for their dedication and commitment.

"I know they all share my ambition that within a few years every one of our pupils will gain the qualifications at Globe that will enable them to go on to university."

70 per cent of pupils passed at least 5 GCSEs including English and mathematics at A*-C grades – up from 59 per cent last year.

Principal Devon Hanson said: "I am immensely proud of the students gaining these results and I'm particularly pleased that significant numbers of our young people are achieving at the highest level of A*-A. This outstanding performance from all of our students takes Walworth Academy to a milestone 70% A*-C.

"We're particularly pleased with our pupils' achievements in English and mathematics, which indicate the progress they are making across the board and put them in a strong position for the continuation of their studies at Walworth Academy's sixth form.

"These results are a strong indicator that we are consistently moving toward our interim goal that more than 80% of our students will gain at least 5 A• – C grades including English and mathematics.

"I'd like to acknowledge the commitment of staff and the dedication of students and their families in these outstanding results."

Both Globe Academy and Walworth Academy are sponsored by the ARK charity.