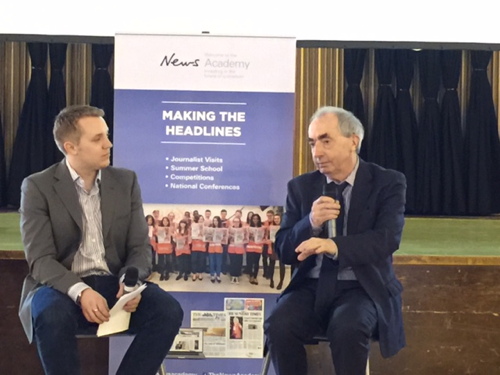 The conference was organised by the News Academy, an education initiative set up by News UK, London Bridge-based publishers of The Times and The Sun.

They debated the relationship between the media, politics and the electorate with Philip giving an insight into his 40 years as a political journalist.

The conference also saw the launch of GE2015, the News Academy's campaign that will give budding young journalists a unique opportunity to get involved in the debate during one of the most unpredictable general elections for decades.

Young people aged 16 to 18 are encouraged to submit articles on election stories they have discovered, or their own analysis and comment on the battle to occupy Number 10, the best of which will be published on the News Academy website.

"Working at The Times was a schoolboy dream for me," said Philip Webster.

"I hope today's debate, along with some of my experiences in journalism, will help tomorrow's aspiring journalists plan their career path for one of the best jobs in the world.

News Academy's Duncan White said: "Today's conference and the News Academy's GE2015 campaign gives young journalists an opportunity to follow in Philip's footsteps and get some real CV beating experience to make it in one of the toughest but most rewarding careers.

"The academy is very professional. Politics and journalism go hand in hand."