Dozens of scrolling advert panels to appear on Southwark streets

Up to 90 scrolling advertisement panels will appear on the streets of Southwark during 2012 after Southwark Council signed a new deal with outdoor advertising firm JCDecaux. 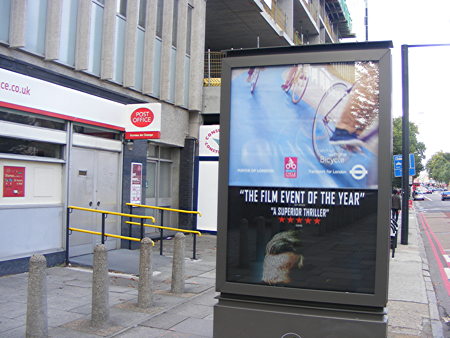 Subject to planning permission, JCDecaux will install freestanding 6-sheet panels across the borough.

JCDecaux says that possible locations including sites near Tate Modern and Shakespeare's Globe in the Bankside area.

"This contract will strengthen JCDecaux's 6-sheet coverage and provide advertisers with new access to audiences in the heart of the capital," says Spencer Berwin of JCDecaux.

Cllr Barrie Hargrove, Southwark's cabinet member for transport, environment and recycling, said: "In the context of unprecedented budget cuts, we have to be on the look out for new ways of generating revenue.

"This contract with JCDecaux will provide Southwark residents with a welcome source of revenue, boosting our services across the borough."

Cathedrals ward councillor Geoffrey Thornton, who is Southwark Lib Dems' environment spokesman, told the London SE1 website "It seems a great shame, that after all the hard work that has been done to try and reduce clutter and regenerate our local streets, Labour Southwark are determined to clutter them up again."

In a separate development a number of advertising panels have appeared on SE1 streets this summer using rules which allow phone boxes to be installed without planning permission to get round the normal processes.