Transport for London has warned that Southwark Council's plan to place a digital advertising billboard at the Bricklayers Arms junction will pose a "significant road safety risk". 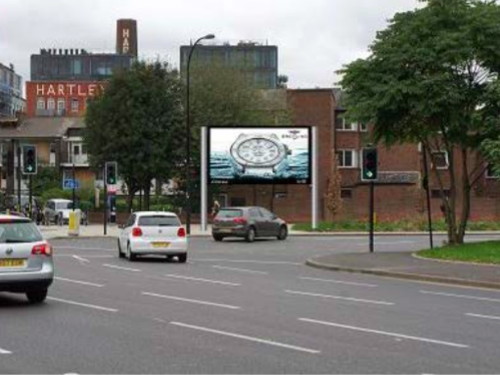 For at least two years Southwark Council, through its advertising partner JCDecaux, has been seeking to install advertising billboards at the Bricklayers Arms junction.

One of the latest proposals is for a digital billboard on the northern side of the junction.

In its submission to the council's planning department, JCDecaux says: "Traffic speeds are typically low when negotiating the junction and the position of the advertisement will ensure no direct conflict with traffic heads or obstruction of road signage.

"There will be ample opportunity to see the simple message being displayed without causing distraction.

However, Andrew Hiley of Transport for London has tabled a formal objection to the billboard on road safety grounds.

"As highway authority, TfL has fundamental concerns over the position of the panel and its subsequent potential for distraction/confusion for drivers circulating on the Bricklayers Arms roundabout," wrote Mr Hiley.

"The panel is directly behind a set of signals, at an area where vehicles weave...

"The nature of the panel i.e. bright colour rich digital will, in TfL's opinion, divert attention from/confuse with the signal aspects, at a critical traffic-weaving location and approaching an area where pedestrians cross.

"As such, TfL believes that the siting of this advert results in a significant road safety risk, and therefore objects to the sign at this location."

A decision on application 15/AP/4878 is expected imminently.