The Government, Network Rail and South West Trains have set out a detailed timetable for works to extend platforms at Waterloo Station and bring the former Eurostar platforms into full use by domestic trains. 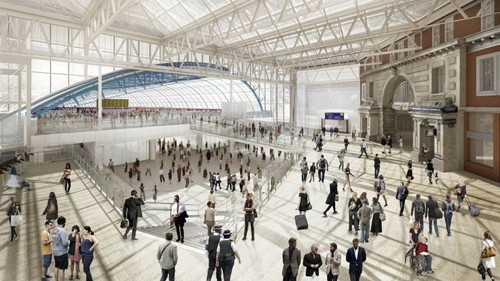 The number of passenger journeys at Waterloo Station has more than doubled in the last 20 years to 234 million a year, and further growth of 40 per cent by 2043 is forecast.

Plans to extend platforms 1-4 to accommodate longer trains – and to bring the old Eurostar platforms at Waterloo International into full use by commuter trains – had already been announced, but this week a detailed timetable for the work has been confirmed.

Network Rail claims that the project will provide a 30 per cent boost to peak time capacity by 2019.

Transport secretary Patrick McLoughlin said: "From 2017, passengers will benefit from a bigger and better London Waterloo station and 150 new train carriages providing more space for passengers arriving at London Waterloo over the three-hour morning peak – this is in addition to the 108 extra carriages that have already been added since 2013."

Sir Peter Hendy, chairman of Network Rail, added: "This is the biggest package of improvements for passengers travelling to and from Waterloo for decades. It will provide passengers with a better station, extra seats and new trains.

"And let's face it, this is not before time. Since 1996, the numbers of passengers on routes into Waterloo have more than doubled – rising from 108 million passenger journeys a year to over 230 million. And this increase is showing no sign of slowing down."

Separately, London & Continental Railways is working to create a new shopping and leisure complex in the unused space below the old international terminal.