White Cube has announced that its new gallery in the former Recall warehouse on Bermondsey Street will open on 12 October. 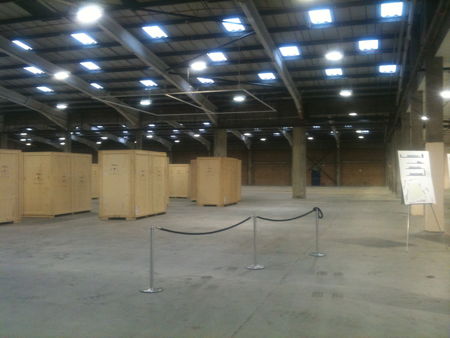 How the warehouse looked before White Cube moved in

The gallery will open six months after Southwark's planning committee approved the conversion of the disused warehouse for use by White Cube.

"The opening of White Cube Bermondsey is an affirmation of the ongoing strength of London as a creative hub and the next chapter in White Cube's history," says gallery owner Jay Jopling.

"I'm immensely excited by the opportunities it will give us to expand the range and ambition of all aspects of our programme, not least the chance to make even more quality exhibitions with world-class artists."

White Cube originally intended to use the warehouse for storage but soon realised it had potential as a space for public exhibitions. The company has a 15-year lease on the site which was previously earmarked for a large residential development.

Architects Casper Mueller Kneer have overseen the conversion of the 1970s warehouse to include three exhibition spaces, storage, private viewing rooms, an auditorium and a bookshop.

The 'South Galleries' will provide the principal display area. Three smaller galleries, collectively known as the 'North Galleries', will feature an innovative new programme of exhibitions.

At the centre of the building there is a gallery of 81 square metres entitled '9 x 9 x 9'.

An auditorium will allow White Cube to present an education programme, artists' films and lectures.

The inaugural exhibition will be 'Structure & Absence', a group show which "uses Chinese scholars' rocks as an organising device to take a fresh look at contemporary abstraction".

The launch of White Cube Bermondsey has been timed to coincide with the Frieze art fair in Regent's Park.