The South Bank's Queen Elizabeth Hall and Hayward Gallery have been included on a 'watch list' of endangered buildings published by the World Monuments Fund. 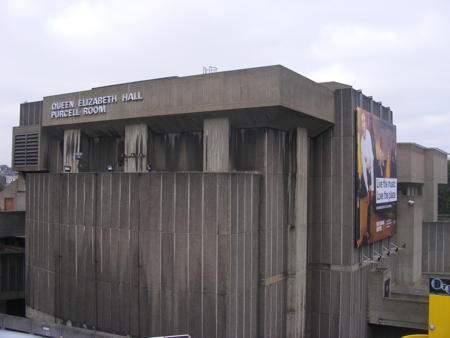 Whilst the Royal Festival Hall and the National Theatre are both listed buildings, successive governments have refused to accord the same status to the nearby Queen Elizabeth Hall and Hayward Gallery.

Applications for listed building status were turned down in 1992, 1998, 2006 and 2010. Last year we reported that the concert hall and art gallery had been included in Lambeth's own 'local list' of buildings of historical and architectural interest.

The WMF has included the Hayward and QEH on its 'watch list' as part of a 'British Brutalism' package along with Birmingham Central Library and Preston Bus Station.

"Upon its completion in 1976, London's South Bank Centre was viewed as a visionary combination of performance spaces and an art gallery, but it continues to be denied heritage status," says the WMF.

"These and other buildings like them date from an era in which government had the resources and the will to create major civic buildings.

"Their reputation suffered during the post-modernist 1980s, and in the very different climate of today they are too often seen as impediments to private-sector redevelopment."

Lambeth Council is currently considering a planning application for the temporary installation of a hotel room in the shape of a boat on the roof of the Queen Elizabeth Hall.

Although permission has not yet been granted, bookings for one-night stays in A Room for London have already been taken.