The Shell Centre, the Hayward Gallery and the IBM Building are among more than a dozen buildings in the Waterloo area to be included on Lambeth Council's new list of buildings and local architectural or historic interest. 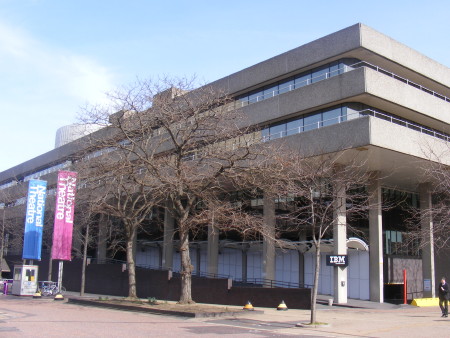 Denys Lasdun's IBM building has been listed by Lambeth Council

On Monday night Lambeth Council's ruling Labour cabinet approved the creation of a new 'local list' of significant buildings that aren't protected by the national statutory listed buildings provision but still have a particular historic or architectural importance.

Many councils maintain a so-called 'local list' of notable buildings, although there is no requirement for authorities to do so.

Inclusion on a local list doesn't confer any legal protection from demolition but does raise awareness of important aspects of local history which might otherwise be overlooked.

The initial selection of buildings to be listed has been compiled from the existing Lambeth conservation areas.

Buildings on the Lambeth list include Denys Lasdun's IBM building on the South Bank, which forms an ensemble with the nationally listed National Theatre designed by the same architect.

The IBM building is owned by Lord Sugar's Amsprop company and has featured in The Apprentice.

Likewise the Queen Elizabeth Hall and Hayward Gallery have been included on the local list whereas their older and more distinguished neighbour, the Royal Festival Hall, is protected at national level.

Other notable SE1 inclusions on the borough-wide list include the old Dover Castle Hotel at the corner of Westminster Bridge Road and Lower Marsh, which is currently the subject of an application for the creation of a new supermarket and apart-hotel.

Also on the local list is the Waterloo Action Centre in Baylis Road.

Anyone can propose a building for local listing. Submissions should be made to Lambeth Council's conservation officers with a clear statement explaining why the building or structure should be considered. Lambeth's cabinet will review the list in 2011.

Owners and occupiers will be able to appeal against the inclusion of their premises on the local list.