Matt Jones has been appointed as principal of Globe Academy in Harper Road. He succeeds Jason Baigent who is principal designate of a new academy in the Olympic Park. 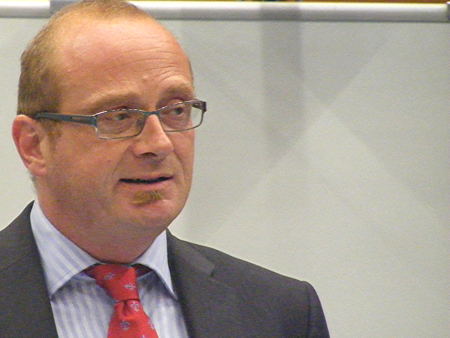 Jason Baigent, who joined Globe in 2009, is to lead a new academy in the Olympic Park

This week hedge fund boss Paul Marshall, who is chair of governors at ARK-sponsored Globe Academy, wrote to parents to inform them that Mr Jones will become principal this summer.

Mr Jones is currently deputy principal at Oasis Hadley Academy in Enfield which, like Globe, is an all-through academy for 4 to 18 year olds.

"Having led an all-through academy facing similar challenges to us, Mr Jones is strongly committed to Globe Academy's vision and ambition for all its pupils," wrote Paul Marshall.

"He shares our belief that we can make Globe a truly outstanding academy, offering exceptional opportunities to our pupils. I am convinced he will be a great asset to Globe at this important stage in our development."

Mr Marshall added: I would like to take this opportunity to add my thanks to Jason Baigent for his huge contribution to Globe's achievements so far. He has played an important part in Globe's development and we wish him every success in his new role."

Jason Baigent, who joined Globe Academy in 2009, leaves at Easter to become principal of Chobham Academy, a new school being set up in the Olympic Park in East London.

Chobham Academy is part of the Harris Federation founded by Lord Harris of Peckham and is sponsored by developers Lend Lease.

"The academy will see local children through all stages of their schooling, giving them an uninterrupted education from nursery until university," said Mr Baigent when his appointment was announced.

"It will combine the traditional values of good manners, excellent behaviour and smart uniform with a modern campus that is simply astonishing."

This September will be the fourth anniversary of the launch of Globe Academy which replaced the former Joseph Lancaster Primary School and Geoffrey Chaucer Technology College.

Mr Jones will be the academy's third principal in four years. Highlights of Mr Baigent's tenure include a visit from US president Barack Obama.