Southbank Centre has announced that it is raising funds for a £43 million refurbishment of the Queen Elizabeth Hall, Purcell Room and Hayward Gallery complex. 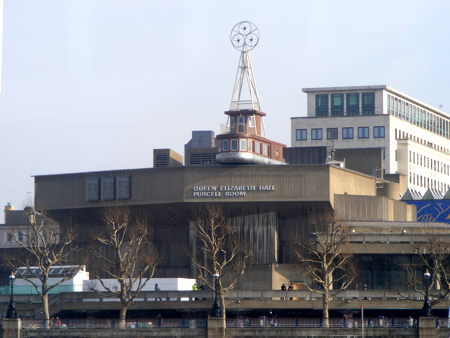 Arts Council England this week announced that Southbank Centre has been successful in the first stage of its application for £20 million funding towards the project to bring the concert halls and art gallery up to the standard of the recently refurbished Royal Festival Hall.

"I am delighted that Arts Council England has supported the first stage of our application for a capital funding grant," says Alan Bishop, chief executive of Southbank Centre.

"This part of the site is in great need of attention and we will now conduct a detailed feasibility study to develop our plans."

Southbank Centre says that it will be exploring an ambitious proposal to reclaim unused and underused space to transform the whole of this complex.

The centre says that a conservation management plan is being drafted in consultation with Lambeth Council, English Heritage and the Twentieth Century Society to better understand both the significant elements of the architecture and how the full potential of the site can be realised as envisaged by the original architects.

Last autumn the QEH and the Hayward were placed on a 'watch list' of endangered buildings by the World Monuments Fund.

The latest proposals are the latest phase of the Rick Mather master plan for the South Bank arts complex which was drawn up 12 years ago.

10 years ago this week the House of Commons culture, media and sport committee issued a report describing the Southbank Centre as a "squalid, seedy and menacing environment".

While much has changed since then in and around the Royal Festival Hall, the QEH is looking shabby and the open-air staircases and walkways now feel incongruous alongside the smarter RFH.