The Prince of Wales has opened an exhibition at Lambeth Palace featuring his own prayer book. 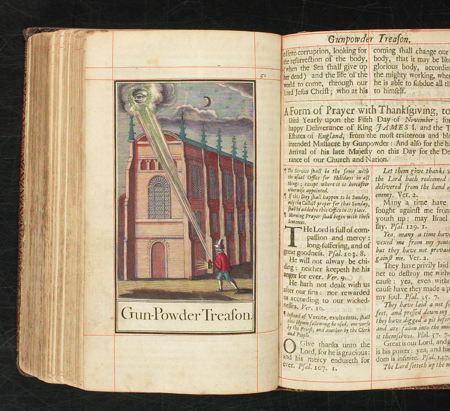 Guy Fawkes and the Eye of Heaven from the Book of Common Prayer (Oxford University Printers, 1710). Fawkes had lived in Montague Close behind Southwark Cathredral. (Trustees of Lambeth Palace Library) 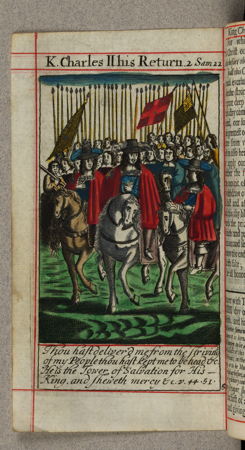 Royal Devotion: Monarchy and the Book of Common Prayer marks both the Queen's Diamond Jubilee and the 350th anniversary of the prayer book.

On Tuesday the Prince Charles also looked at a copy of the Welsh Prayer Book published just two years after the 1662 English version.

But the displays begin with the missal, breviary, Sarum texts and other books which Archbishop Thomas Cranmer drew on when compiling the original Book of Common Prayer more than a century earlier as Henry VIII broke with Rome. All these reference books survive today at Lambeth Palace.

The exhibition centrepiece is a copy of the very first Book of Common Prayer edition dated 1549, the year of Edward VI's accession. It was a fusion bringing cries of both 'not Catholic enough' and 'not protestant enough'.

It seems that the now much loved Choral Evensong was first heard at St Paul's Cathedral in 1548 just after the death of Henry VIII. Music for the new Mass, rebranded just 'Communion', was first supplied by Edward VI's court musician John Merbecke who knew Southwark Cathedral.

But this was not the end of the matter. The new service book was to be banned twice. First Mary returned the country to the Old Faith and on show are some of her reissued Latin books.

Elizabeth I returned Common Prayer to daily use and her own book is preserved for all to see.

Then Cromwell replaced Common Prayer with his Directory for the Public Worship of God. It was the horror of this Puritan period when even Christmas was scrapped that resulted, 300 years ago, in such a firm return to the revised Common Prayer of 1662.

This updated Book of Common Prayer was imposed without much trouble on all 'parishes, cathedrals, Eton College, Winchester College, the Dominion of Wales and Town of Berwick upon Tweed'.

The exhibition's books have been taken down from the shelves and displayed open to tell the fascinating story of the development of the Book of Common Prayer.

But maybe most revealing are the unexpected scribblings on some pages.

We can see Henry VIII's scrawled 'worthless' on Katharine of Aragon's defence against threatened divorce.

Archbishop Geoffrey Fisher's own annotated copy of the 1953 Coronation Service has directions on how to crown the Queen. The trick is "put on gently" but then "press down the back firmly".

The newest exhibit is a William and Catherine wedding service sheet showing directions for Archbishop Rowan Williams added by his chaplain.

Suitable for this Diamond Jubilee year is a letter from the present Queen's father thanking Archbishop Randall Davidson for conducting his wedding and written from a modest honeymoon destination in Surrey.

On sale are postcards featuring some of the beautiful illustrations for such forgotten services as Restoration Day marking Charles II's return from exile by way of Borough High Street.