Plans for an eight-storey library building on Lambeth Palace Road has been given the green light by Lambeth Council's planning applications committee. 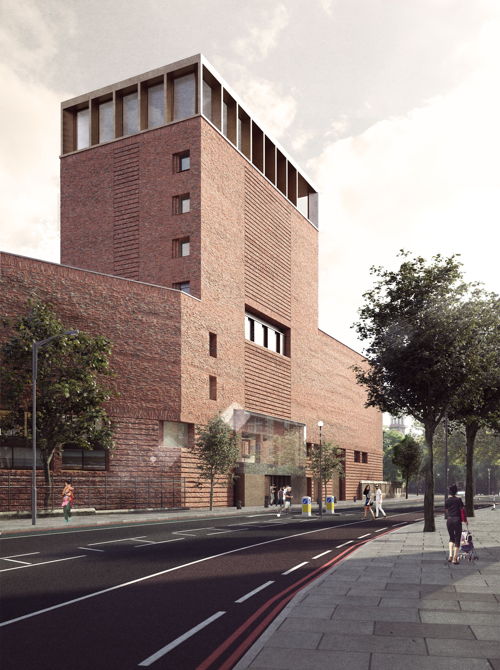 The building, designed by Wright & Wright architects, will stand on the edge of Lambeth Palace garden and opposite the Evelina London Children's Hospital.

The grade II listed garden wall will be breached to allow the creation of an entrance with a view through to the garden landscaped by the Lambeth-based Dan Pearson Studio.

Tree officer Ian Leonard said that replacement trees near the building would take ten to fifteen years to mature.

The existing library, England's oldest public library, was founded by Archbishop Richard Bancroft whose body was recently discovered in a lost vault under St Mary Lambeth, now the Museum of Gardening. He stipulated in 1610 that the books must remain at Lambeth Palace.

Voting at the planning applications committee meeting on Tuesday evening was four to one in favour of the scheme.

It was opposed by Ben Kind, councillor for Bishop's Ward which includes Lambeth Palace, who expressed concerns about the setting and questioned both the design and the need for the height.

The top floor is intended as an observation room for enjoying views of both the Archbishop's garden and the Palace of Westminster.

The Library staff are intending to open the viewpoint room on days when the garden is open to the public.

The committee heard that Waterloo Community Development Group opposed the loss of open space and trees. It described the building as "ugly and oppressive" and likely to harm views from Archbishop's Park.

Also questioned was the need for an on-site facility in an area of high risk for flooding.

Cllr Diana Morris secured agreement for old boundary wall bricks at the northern end of site to be retained in the development.

Lambeth conservation officer Doug Black said that the new building had already won an Architectural Review award and was "a listed building of the future perhaps".

He added that the red bricks would tone with Morton's Tower gateway where some of the 120,000 books are at present stored.

Other valuable books are held in unsuitable conditions in the Great Hall and temporary storage.