Pope Benedict XVI will visit Lambeth Palace during his state visit next week. This week a liberal catholic campaign group chose an Anglican church in Waterloo to set out their agenda for reform. 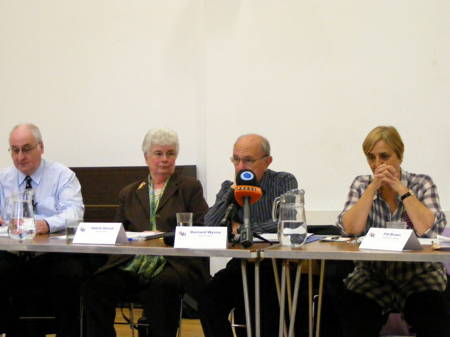 The Catholic Voices for Reform press conference at St Andrew's in Waterloo. From left: Simon Brydon-Brook (Catholics for a Changing Church), Valerie Stroud (We Are The Church), Bernard Wynne (Stand Up For Vatican II) and Pat Brown (Catholic Women's Ordination)

The Pope is due to arrive in Lambeth on Friday 17 September at about 4pm. He will be the guest of the Archbishop of Canterbury Rowan Williams and during the hour-long visit the Holy Father will meet England's Anglican and Roman Catholic diocesan bishops.

Lambeth Palace Library will be closed all week to allow for preparations for the Pope's visit. Roads around the palace will be closed from 12 noon on Friday. The Metropolitan Police has published a map [PDF] showing which roads will be affected.

Afterwards the Pope will take his first ride through London in a Popemobile when he leaves at about 5pm for the Houses of Parliament. The planned route is Lambeth Bridge, Millbank and Parliament Square.

The Pope will make a speech in Westminster Hall before joining the Archbishops of Canterbury and Westminster at the Abbey for evening prayer.

Late on Saturday afternoon, before joining a prayer vigil in Hyde Park, the Pope is expected to meet two former Archbishops of Southwark, Michael Bowen and Kevin McDonald, during a visit to St Peter's Residence, an older persons' home run by the Little Sisters of the Poor, in Vauxhall.

Catholic Voices for Reform, a liberal catholic campaigns umbrella group, has posed six questions to ask the Pope. A letter to be handed to the Pope's representative calls for women's ordination, a married priesthood, a understanding of sexuality, collegiality, a modern liturgy and accountable administration.

Bernard Wynne of the Stand up for Vatican II group, announcing the demands on Tuesday during a press conference at St Andrew's in Short Street, said that England was now a very different world compared to when the last Papal visit took place almost thirty years ago.

He was flanked by representatives of We Are The Church and Catholic Women's Ordination. Sister Myra Poole, former headteacher of Notre Dame School in St George's Road, was prevented by illness from attending.

Archbishop of Southwark Peter Smith has agreed to a meeting with anti-Papal visit protesters being convened at New Scotland Yard. Andrew Copson, British Humanist Association chief executive, and Southwark-based activist Peter Tatchell are expected to take part in the disscussion on Wednesday.

In 1982 Pope John Paul II visited St George's Cathedral where the occasion is recorded in a stained glass window.

In 1847, after ordination in Rome, John Henry Newman celebrated his first Mass in England at St George's. On the last day of the Papal visit several Southwark parishioners will be present in Birmingham for Newman's beatification ceremony.

The Archdiocese of Southwark has published a set of web pages about the local aspects of the Pope's visit. There is also a blog from the Southwark Archdiocese Papal visit team.