The senior judge at Inner London Crown Court, His Honour Judge Roger Chapple, has pledged to use his new role as Recorder of Southwark to build closer relations with the local community. 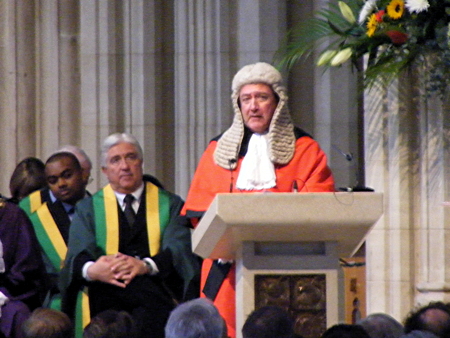 Southwark Council last year voted to approve HHJ Chapple's appointment to the honorary role of Recorder of Southwark and the title was conferred formally by the Mayor at Saturday's civic awards ceremony.

HHJ Chapple's nomination to the post was introduced by Tony Sharp, clerk to the Guildable Manor of Southwark, who reminded guests that Southwark is the only local authority in the country to have three crown courts within its borders.

In his speech at the ceremony HHJ Chapple – whose new title allows him to wear red robes and be addressed in court as 'my lord' – joked that his new robes make him look like Father Christmas.

"I am conscious of the present lack of positive community ties between my court – which sits perhaps a little aloofly up at the top end of Newington Causeway – and the borough and people of Southwark," he said.

"Daily I and my fellow judges see the ghastly, corrosive effect of local crime – much of it knife crime, much of it gang related."

He added: "I can't help thinking that my court could do something more to help in the fight against crime.

"Soon after arriving at Inner London Crown Court, I tried to start an initiative by writing to the local schools and inviting them to send groups for visits: to watch a case in action, meet a judge, to sit in the dock.

"Very, very few replies were received – sadly none of them positive."

He continued: "I'm going to try again; with the additional clout that you have given me as the honorary recorder of Southwark I might achieve more than I did last time around."

HHJ Chapple added that he is "open to all suggestions" for forging new links between the court and the Southwark community.