Sir Michael Caine was one of eight individuals and organisations to be awarded the freedom of the borough of Southwark on Saturday afternoon at the annual civic awards ceremony in St George's Cathedral. 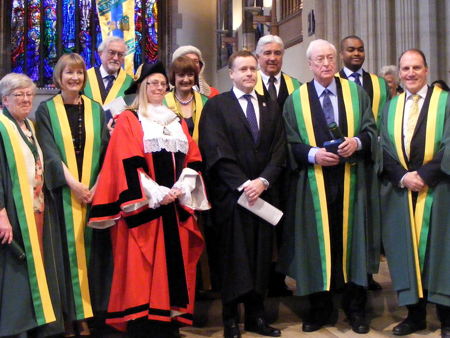 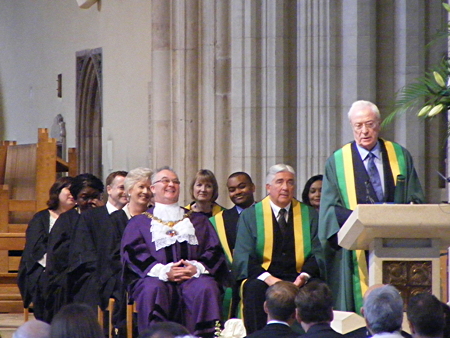 Sir Michael was nominated for the honour by council leader Peter John who outlined the actor's many links with the borough – including a spell living in a prefab yards from the Elephant & Castle junction – although he noted that the star has not always written about Southwark in glowing terms, having claimed in an autobiography that "the Elephant was not exactly a classy district; the streets were as rough and dangerous as it was possible to get without anyone actually declaring war".

The council leader added: "Michael Caine and the Elephant have been on quite a journey since then; we're still working on the Elephant."

Accepting the award, Michael Caine said: "It's quite humbling for me to come here and speak after [Lance Corporal Johnson Beharry] and all those wonderful volunteers who have tried to help people for nothing. All I've done most of my life is to try to help myself.

"It's very personal award to me because it's about who I was, how I was and what I became.

"It all came from here. I was born in Rotherhithe; I went to John Ruskin Infants School and the very first time I ever acted was at Clubland in Camberwell."

The freedom of the borough was also bestowed on local historian Stephen Humphrey, formerly of Southwark Local History Library, who is soon to publish a new book about the Elephant & Castle.

The same honour was accorded to Coral Newell, executive director of the Beormund Community Centre and indefatigable organiser of the annual Bermondsey Care for the Elderly Christmas Day lunches at the top of Guy's Hospital tower.

Victoria Cross holder Lance Corporal Johnson Beharry, who now lives in Dulwich, was nominated for the freedom of the borough by deputy lieutenant Jenny Bianco.

All three of Southwark's members of parliament were granted the freedom of the borough, including Bermondsey & Old Southwark's Simon Hughes who said: "If you're the MP for Guy's Hospital, London Bridge, Borough Market, the Imperial War Museum, Tower Bridge and Surrey Docks Farm, there is no place that you could be more proud of."

He added: "We are a borough that has produced England football captains and world boxing champions.

"We are the borough of breweries, Peek Freans and Sarson's vinegar; of people coming from Scandinavia, the Baltic, from Latin America, Ghana, Sierra Leone, Nigeria, the Carribbean and Ireland.

"We are the most wonderful, wonderful place and it is a privilege to be here."

In the main section of the civic awards, recipients with SE1 connections included Adam McKeon who was presented with a letter of commendation for his fundraising efforts on behalf of Ronald McDonald House in Snowsfields.

The Queensborough Community Centre on the Scovell Estate was awarded with the Liberty of the Old Metropolitan Borough of Bermondsey in recognition of nearly 20 years' service to local residents.

Clifford Meeks, past chair of the Avondale Square Residents' Association, received a lifetime achievement award for his community and church work.

The awards are organised jointly by the council and the Southwark Civic Association.

At the same ceremony Judge Roger Chapple was given a scroll in recognition of his appointment as Recorder of Southwark.