Judges from Southwark courts assemble at cathedral for service

The Southwark Judiciary has held it first Legal Service at Southwark Cathedral. 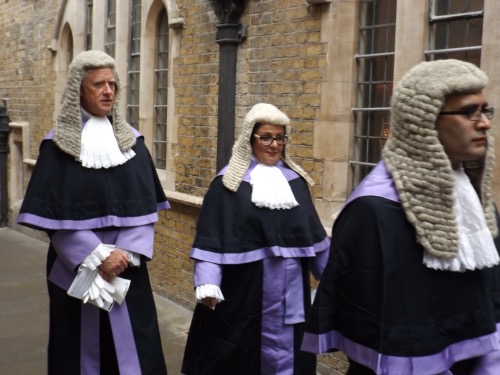 Judges from the Strand Law Courts and Old Bailey attend Westminster Abbey at the start of the legal year in October.

Southwark's Legal Service on Tuesday was held at the end of the legal year.

It was the idea of the Recorder of Southwark, His Honour Judge Roger Chapple, the senior resident judge at Inner London Crown Court in Newington Causeway, who has pledged to build closer relations with the local community.

A procession of around 50 judges who sit at Southwark's three crown courts along with district judges from Camberwell was led by the officers of Southwark's Guildable Manor.

The service, which took the form of choral evensong, was conducted by the precentor Canon Gilly Myers.

In welcoming the congregation, the Dean of Southwark the Very Revd Andrew Nunn said the Diocesan consistory court sat in the cathedral's retro-choir. He recalled that this was where composer John Merbecke faced trial for heresy with his death sentence being commuted as he was 'a mere musician and knew no better'.

The Bishop of Southwark, the Rt Revd Christopher Chessun, in his sermon spoke of the place of justice and the rule of law and "the legal pre-eminence of Southwark". He added that the importance of justice could never be underestimated.

"In the church we are also working for justice and that means challenging injustice wherever it is done."

A reception afterwards was co-sponsored by the Guildable Manor which sits as a manorial court, or court leet, every November.

The collection is to be donated to the Southwark Young Pilgrims and the Witness Service.

However, the future of Southwark's courts appears to be uncertain due to spending cuts.

In May this year judges were reportedly "outraged" by the rumour that Southwark Crown Court which opened in 1983 might close. The Ministry of Justice has called the reports "speculation".