The Place: Shard’s 17-storey little sister is 'topped out'

The 17-storey office building currently under construction next to the Shard has been 'topped out'. 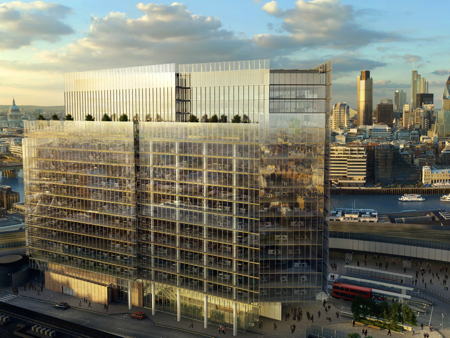 Like the Shard, The Place has been designed by Renzo Piano and is part of the London Bridge Quarter scheme financed by the state of Qatar.

Due for completion in spring 2013, the 600,000 sq ft speculative office block is still looking for a tenants. Companies such as Google have been linked with the building.

"This is another important milestone in our £2 billion development at London Bridge Station, one of the capital's key transport hubs with more than 50 million passenger movements annually," says Irvine Sellar, whose company is developing the scheme on behalf of the Qatari majority owners.

"The Place benefits from sharing architectural, design and cultural DNA with the Shard and forms part of London's most exciting regeneration projects that will see more than 12,000 people working there when it is completed next year."

Previously dubbed the 'baby Shard' or 'Gem', The Place stands on the site formerly occupied by the Richard Siefert-designed New London Bridge House.

The newly reorganised London Bridge Bus Station sits at the foot of the building.

When completed, new escalators outside the Place will lead to an underground shopping mall.