CLS Holdings, one of the partners in the Shard of Glass skyscraper at London Bridge, says that funding negotiations are at an "advanced stage" but have been affected by "the recent adverse credit markets". 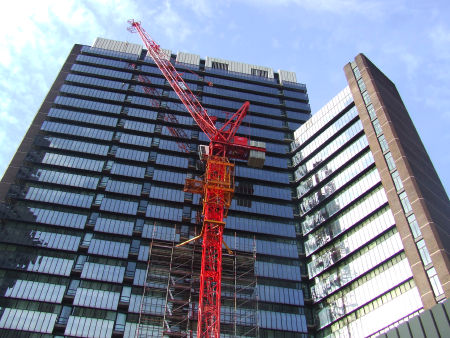 Preparatory works for the demolition of Southwark Towers have begun

In its intermin financial report for the first half of 2007 CLS Holdings says that: "Operational progress has proceeded according to programme and we are ready to commence demolition works at The Shard [ie Southwark Towers].

"Negotiations in respect of the funding for the project are at an advanced stage but have, unfortunately, been affected by the recent adverse credit markets. It is hoped that the funding can be finalised in the near future in conjunction with a restructuring of the shareholding structure. We will not commence any major development works until the loan finance has been secured."

Meanwhile PricewaterhouseCoopers has moved out of the existing Southwark Towers building on the site and a large crane has been installed.

"We also sold our Southwark Towers office, at a profit of Ł71 million."

The Shard – a joint venture between CLS, Sellar Property Group and the Halabi Family Trust – together with CLS's own 25 London Bridge Street (aka Baby Shard) scheme, are known as the London Bridge Quarter.

The financial report says: "The funding options for both projects are under review with a view to achieving completion before 2012."

Last week it emerged in the trade press that Transport for London, a key pre-let tenant for the London Bridge Tower, is making contingency plans for office accommodation in case the Shard scheme is delayed or abandoned.

Do you think the Shard will ever be built?