A woodland in Rainham has been named in honour of James Braidwood, the pioneering chief fire officer killed whilst tackling a massive blaze in Tooley Street in 1861. 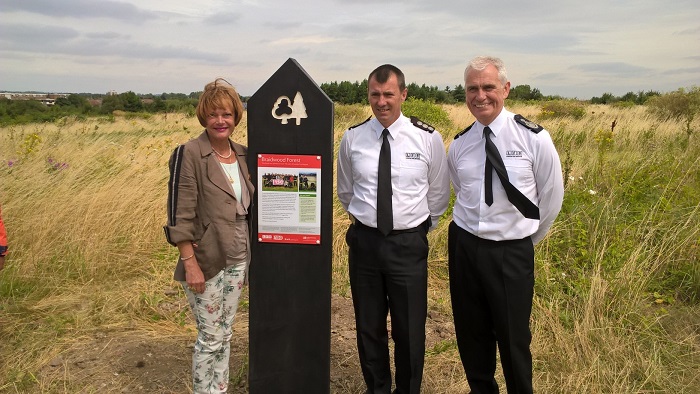 The new woodland has been named named after James Braidwood, the first superintendent of the London Fire Engine Establishment, after a competition among fire brigade staff.

150 trees – one for each year of the brigade's history – have been planted in the new woodland.

Mr Braidwood's great great great granddaughter, Diana Hamilton-Jones, travelled from The Netherlands for the official opening of the forest and gave a short speech.

Ms Hamilton-Jones said: "James Braidwood is today very much an unsung hero, so to have this new forest named after him means that every visitor who comes to enjoy the peace and beauty of the area will go away knowing who he was and how much he contributed to our society.

"It means a great deal to the family that firefighters have put forward his name for recognition 155 years after his death.

"This year is a very special one for London Fire Brigade as they celebrate their 150th anniversary and I am sure that Mr Braidwood would be humbled by the recognition he is receiving as part of their celebrations.

"When I was kindly invited by the London Fire Commissioner to attend this event, I was very honoured and only too pleased to fly over from my home in The Netherlands."

London Fire Commissioner Ron Dobson, who attended the opening, said: "It is an honour to have been joined by the great great great granddaughter of James Braidwood in the brigade's 150th anniversary year.

"Naming the forest after James Braidwood is a fitting tribute and I hope it will help raise the profile of the work he did for the brigade.

"The forest helps us give back to the community and I hope it will be enjoyed by the community in Rainham and further afield for years to come."

Two years ago a small statue of James Braidwood was installed in the Brigade restaurant in Tooley Street.

The London statue is a miniature replica of the Edinburgh memorial to the pioneer which was unveiled in 2008.

In Southwark, he is honoured with the name of Braidwood Street (now the goods entrance to More London) and with a plaque at the corner of Tooley Street and Cottons Lane.