The public park in the churchyard of the former church of St John Horselydown was officially reopened at the end of last month after a five-month closure for refurbishment. 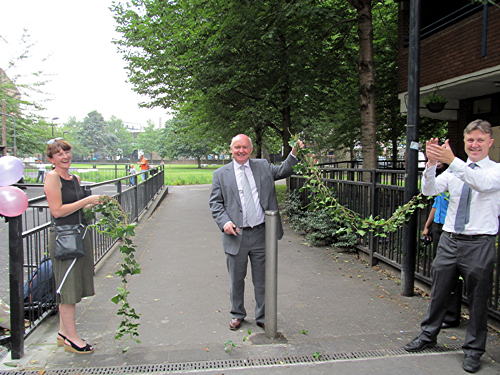 Cllr Barrie Hargrove cuts the ribbon to mark the reopening of the churchyard, flanked by Jillian Houghton of Southwark Council and Shane Clarke of Team London Bridge

The churchyard now boasts a redesigned network of paths to match the natural flow of foot traffic, new planting, a new play area which caters for older children, a small seating area and a widened entrance in the south eastern corner of the park.

The project, which forms part of the council's wider Bermondsey streetscape improvement programme, has been funded from section 106 payments from local development schemes.

Originally due for completion in early May, the gardens remained shut until mid July. The council blamed "unforeseen delays in the delivery of materials" for the hold-up.

St John's Churchyard is one of three venues for the London Bridge Live Arts series of open-air performances during the Olympics and Paralympics organised by Team London Bridge and IdeasTap.

The opening ceremony was performed by Cllr Barrie Hargrove, Southwark Council's cabinet member for environment, transport and recycling, just after the Olympic flame arrived at City Hall at the end of last month.

"It is brilliant to have St John's Churchyard opened right in time for the Olympics," said Cllr Hargrove.

"The London Bridge Live Arts series is a great chance for everyone to enjoy live performances in Southwark adding to the wide range of exciting activities we have going on in the borough."