Residents of Falcon Point at Bankside have raised their concerns about the drastic pruning of shrubs on the riverside walk. 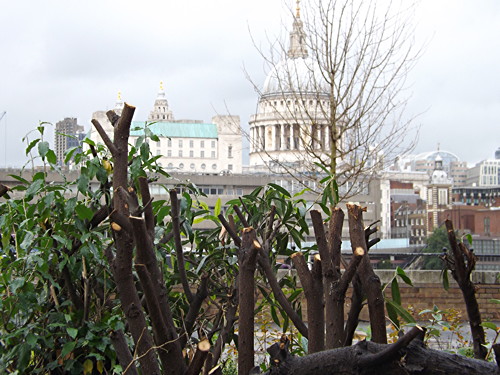 Falcon Point Management Group, the tenant management organisation that runs the Bankside housing block, has worked with Network Rail to protect the shrubbery between the riveside walk and the block of flats during the lengthy Blackfriars Station building works.

Residents say that the mature shrubs have perfumed flowers in spring and are a haven for wildlife including wrens and blue tits.

"Local residents have worked hard to preserve this area for the benefit of everyone who walks past, so it's clearly very distressing for them to find it shredded to bits with no warning," said Cllr Geoffrey Thornton (Lib Dem, Cathedrals ward).

"Unfortunately, this kind of thing is becoming a bit of a trend for Southwark Council after similar incidents over the summer. They need to get their act together and start supporting community gardens rather than destroying them.

"I've asked the council to urgently investigate this matter. As well as reimbursing the local community for any damage caused, they also need to look to work proactively with the residents to replant this area as soon as possible."

Cllr Barrie Hargrove, Southwark's Labour cabinet member for environment, transport and recycling, said: "These beds have been on the council's maintenance schedule since 2003 and have been pruned annually since that time.

"They have been boarded up for the last nine months due to the works taking place by Network Rail and have only just been opened up again. They are overgrown and full of litter and other unpleasant items. To ensure the site can be cleaned and maintained, hard pruning has begun.

"The shrubs in the beds include Choisya, Elaeaguus and Prunus. All are hardy perennials and require pruning each autumn to maintain their shape and ensure sufficient light can get to all parts of the plants to encourage healthy growth. As with all planting schemes that have just undergone pruning, this site will look a little sparse until next spring but the plants will rejuvenate and benefit from the work undertaken next year.

"As the site is yet to be finished, it currently looks untidy but work is due to be completed next week when the area will be left clean and well maintained."