A House of Commons select committee report has highlighted the lack of public toilets on the South Bank and Bankside. 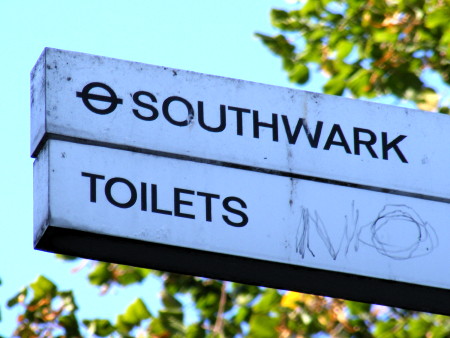 The Communities and Local Government Committee has published a report of its inquiry into the provision of public toilets in the UK.

The report says that the South Bank (between Lambeth Bridge and Tate Modern) attracts more than 14 million visitors each year, yet no public toilets at all are provided by Lambeth Council.

This claim is based on evidence from the British Toilet Association which two years ago carried out a major study of lavatory provision along the South Bank.

Richard Chisnell, chair of the BTA, gave evidence to the select committee in June.

"There are a lot of lovely toilets along the South Bank, we know them all very well now, in all the theatres, the National Film Theatre [BFI Southbank] – you name it, they are there, there are probably plenty, but they will not put signs up," Mr Chisnell told MPs.

"There is only one ﬁnger sign on the whole of the South Bank to Bankside but they have been shut for three years and they still have not taken the sign down, and this was three years ago, so that is how important people think toileting is, sadly.

It is likely that Mr Chisnell was referring to the signpost near Falcon Point at Bankside which points to the now-closed Southwark Council public conveniences in Hopton Street. Someone has taken vigilante action and modified the sign with a felt-tip pen to indicate that the toilets are now closed.

Mr Chisnell continued: "But there is a need, and we suggest that certain portions of the South Bank should have a free public toilet because that way anyone who needs to go should be able to go, and these would need to be funded by the main buildings along the South Bank that have jurisdiction over that patch of land, if you like.

"The reason they will not put up ﬁnger signs, we understand, is they do not want to attract everybody into their premises to use the toilet. 95% of us can get away with it without being questioned, but there are people less fortunate than ourselves and we have to satisfy their needs as well."

The select committee has called on the Government to require local councils to prepare a public toilet strategy in consultation with residents.

There are early proposals for a semi-permanent toilet block and tourist information centre on the Jubilee Gardens side of Hungerford Bridge.

East of Bankside, public toilets have recently been provided at Potters Fields Park next to City Hall.

As the report notes: "Lavatory humour is rife in British culture, but the provision of public toilets is no laughing matter."

What do you think about public toilet provision in SE1?