Around 50 people took part in a demonstration on Saturday afternoon to show their opposition to a proposed high-rise development on the site of St George's Mansions and the Imbibe bar on Blackfriars Road. 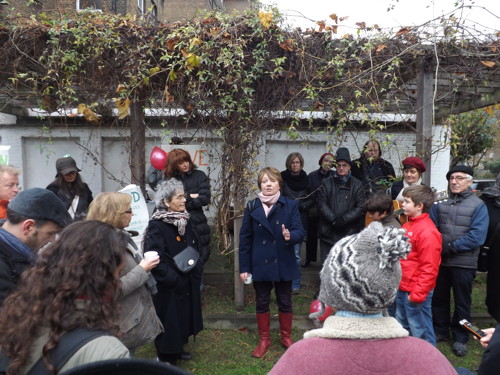 The demonstration was called by the new group Blackfriars Action for Responsible Development (BARD) which has been formed by local tenants' and residents' associations.

In September we reported on the two development options put forward by Linden Homes for the site bounded by Blackfriars Road in the west, Surrey Row in the north and Pocock Street in the south.

At Saturday's demonstration BARD launched a new paper and online petition calling on Southwark Council to organise further consultation with neighbours and give serious consideration to alternative proposals.

"What we are saying today at this demonstration is that local people have had enough," said Maxine Walker of the Nelson Square Gardens Community Association.

"The Linden Homes development is the straw that has broken the camel's back because they have been so extraordinarily arrogant.

"They have not consulted local people in any meaningful way and they have tried to steal the garden that we fundraised for and planted."

She added: "These people think they can do anything; they think they can demolish buildings that are of architectural value and they can put up ugly 27-storey glass buildings which offer nothing to local people: no housing, no social amenities, nothing positive to this local community.

"They are simply trying to make a large profit."

"The only thing that will stop them is us. There is nothing else.

"We can't stop buildings going up here, but we can say that those buildings have to provide something to the local community."

Ms Walker expressed a fear that local people will be priced out of the area, and cited the example of a full-time Southwark Council employee who was told that she didn't earn enough to qualify for so-called 'affordable housing' in another Blackfriars Road development.

"We have to get together, work hard and act in solidarity to make this a community that people want to live in, to have children in, and that has people of all different kinds," she said.

She asked the assembled crowd: "It's been a community for a long time; do we want it to continue as a community?"

The answer was a resounding 'yes'.

Cllr Morris told Cllr John: "There are a lot of rumours going around the community that you are having secret meetings with developers – which even the ward councillors are not allowed to come to – and you are carving up [Blackfriars Road] and agreeing with developers that they can put in proposals which massively contravene existing policy."

Cllr John denied that the meetings were secret and told Cllr Morris that the sessions were designed to encourage "blue sky thinking" about the future of the road.

He said that the landowners' forum is intended "to try and bring developers and landowners together so we can get an agreed view on public realm and a shared vision for Blackfriars Road".