Bravery awards for soldiers who defused the 'Bermondsey bomb'

Two of the soliders who made safe a World War II bomb found on a demolition site in March 2015 are to receive a bravery award from the Queen. 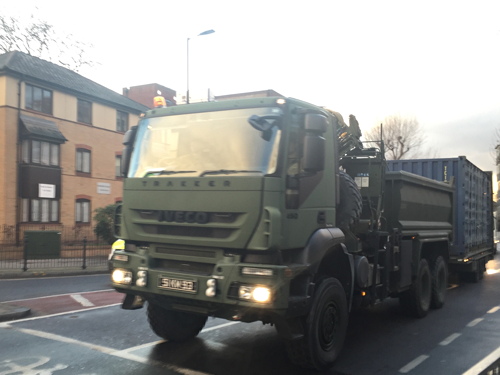 Two ammunition technicians with the Royal Logistic Corps are to be recognised with a Queen's Commendation for Bravery (QCB), having disarmed a 250kg World War II German high explosive bomb over the course of two days.

The nature and intensity of the task meant the pair had to work in shifts through the night while they painstakingly made the bomb safe, allowing it to be transported to a Kent quarry for destruction.

Local residents were evacuated from their homes whilst the soliders carried out their work.

The citation for their awards records that the soldiers' "inspirational and courageous action in the face of an ageing and lethal weapon, in an unknown state undoubtedly prevented loss of life and is especially worthy of public recognition".

"It's a great honour. I really am thrilled," said Staff Sergeant Ed Clinton on learning of the award.

28-year-old Ed, who has been in the Army for 11 years, was able to confirm that the bomb had two transverse fuses, doubling the points of initiation and risk of detonation.

Given the bomb's size, a controlled detonation would have caused unacceptable damage and it had to be made safe by hand.

"Luckily I recognised it because we'd only recently done the course," said Ed.

"So, that was a bit of reassurance, first and foremost, because sometimes when these items have been buried for several years they can be quite hard to identify.

"Initially I was a little bit apprehensive because usually we only deal with EOD within our patch.

"Then, when someone said it's down in London, and realise you're on that specific duty it's quite overbearing initially. But then when you get there and you get into the crux of it, you realise it's just the same as any other EOD task just on a slightly larger scale."

He added: "It is a relief knowing that you've done it successfully because you don't get the opportunity to train on live versions of these types of munitions just because of the size and type of nature they are. Being foreign ammunition, we'd never have had them in service."

• New homes on the building site where the bomb was discovered are now being marketed by Linden Homes under the name 'Corio' priced from Ł515,000 to Ł945,000.

• Southwark's planning committee recently approved the release of section 106 funds linked to the Corio development to refurbish the football pitch on the Swan Mead Estate.