Transport campaigners and local politicians gathered at London Bridge Station on Saturday morning to mark the final day of the inner South London Line service to Victoria via Peckham Rye. 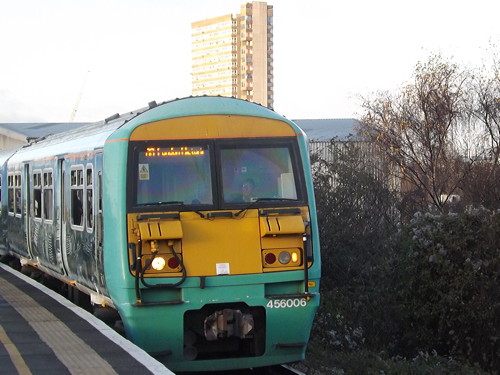 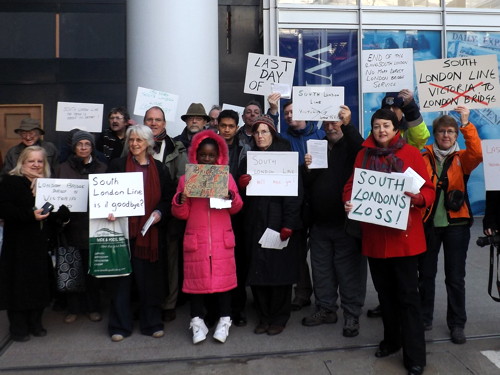 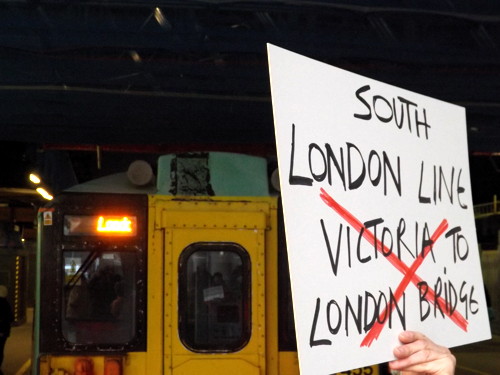 Campaigners held up placards and handed out leaflets to passengers, many of whom were unaware of the changes

At London Bridge the activists handed out leaflets to alert passengers to the impending change.

The South London Line service was withdrawn on the eve of the launch of the London Overground extension from Surrey Quays to Clapham Junction. Whilst this new link will complete London's outer orbital rail line and offers many benefits to South London residents, some stations will be left without direct trains to Central London termini.

Campaigners point out that there are now no services to Victoria from Peckham Rye and Denmark Hill in the evenings or on Sundays.

Clapham High Street and Wandsworth Road have lost all their direct services to Victoria whilst Denmark Hill no longer has a direct link with London Bridge.

The changes also mean that the frequency of trains between London Bridge and South Bermondsey has dropped from six to four an hour.

Although there was a broad political consensus in favour of a new Victoria to Bellingham service which would have mitigated the loss of the South London Line service during the rebuilding of London Bridge Station, the Department for Transport refused to fund the extra trains.

"While the new London Overground service will bring benefits there can be no escaping the fact that the withdrawal of the South London Line will be a major blow to many, many people," said Eileen Conn, chair of the Southwark Rail Users Group.

She added: "We are hopeful that this successful service will be reinstated once the rebuilding works at London Bridge are completed in a few years time."

Val Shawcross told the London SE1 website: "Everybody supports the new Overground service but they are robbing Peter to pay Paul.

"They are funding an orbital service by taking away links into to Central London.

"The difficulty people have around the inner London doughnut is that by the time most long-distance services get here they are full.

"The beauty of the South London Line was that it started, it ran through and it ended within inner London and it provided a service for the population in this area.

"It's going to cause great inconvenience to people."

In a written answer to Val Shawcross published last month, Mayor of London Boris Johnson said: "The new London Overground route that opens on 9 December will provide a much needed service to south Londoners, with new destinations and higher train frequencies.

"However, I appreciate the inconvenience that withdrawal of South London line services (which, as you know, is necessary to facilitate Thameslink works at London Bridge) will cause to some passengers.

"That is why you, I, and many others have tried so hard to get the DfT to adopt even those mitigation measures that would cost nothing at all, i.e. additional calls on some existing Southeastern services at Peckham Rye and Denmark Hill.

"Despite these cross-party efforts, ministers have decided the impact on journey times – on average rather less than 2.5 minutes – for longer-distance users from Kent is too great a price to pay."

He added: "I will continue to make the case for mitigation as part of the Thameslink and Southeastern franchise renewals, and also to push for more Mayoral control over London's suburban rail network."

• Trains will continue to run from London Bridge to Victoria on the outer South London Line via Crystal Palace.