Network Rail has announced further details of the schedule for the redevelopment of London Bridge Station and released new images of the completed concourse and platforms. 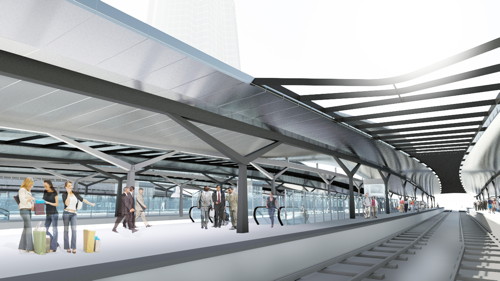 Plans for the redevelopment of the station were approved by Southwark councillors last December and rubber-stamped by City Hall earlier this year.

“This will be the most ambitious redevelopment of any London station in a generation and one of the most technically demanding projects ever undertaken on our railway," said Robin Gisby, managing director of network operations at Network Rail.

"It is only possible because of the partnership that we have built with the train operators, Transport for London and our suppliers. But ultimately its success will be defined by the passengers who use the station. The benefits will be massive, but we need their help and support to make it happen."

Transport Secretary Patrick McLoughlin said: “Train passengers will be the biggest winners from this investment as London Bridge Station is transformed from one of the capital’s most congested stations into one of the most modern, accessible and passenger-friendly transport hubs in the UK.”

Train operators First Capital Connect, Southeastern and Southern have launched an awareness campaign to prepare passengers for the disruption to rail services during the demolition and construction of the station.

Network Rail will carry out the work to the station and track in distinct phases, each having a different impact on train services.

This means a number of shorter periods of disruption rather than all passengers being affected for the full duration of the project. The biggest changes include:

May 2013: Platforms 14-16 are taken out of use to enable redevelopment work. Some services will be retimed and platform changes required.

December 2014 to 2018 (TBC): Thameslink route services to and from central London diverted away from London Bridge.

Further information will be available at a series of roadshows at London Bridge Station:

From January 2013 Stainer Street, Weston Street and St Thomas Street will be closed and bus route 381 will be rerouted via Duke Street Hill.

A new temporary ticket office has recently been delivered to London Bridge.