Candidates for the London Assembly in the Lambeth & Southwark constituency gathered last week to answer questions on transport issues at a public meeting organised by local cycling groups. 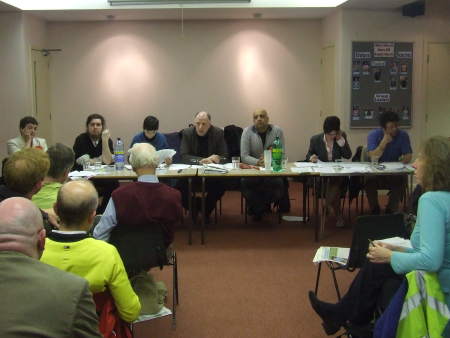 The meeting – arranged by Southwark Cyclists and Lambeth Cyclists – was held at Herne Hill Baptist Church.

The meeting was chaired by John Stewart, chair of HACAN ClearSkies.

The meeting covered a broad range of transport issues from bicycles to trams to trains to Routemaster buses. There was a broad consensus that 20 mph should become the default speed limit on residential roads in London.

Shane Collins highlighted his party's achievements at City Hall over the past four years:
"By virtue of the fact that we've had two Greens on the assembly and Livingstone has had to depend on us to get his budget through we've been able to screw extremely good green things into his budget ... this year we got Ł140 million out of it."

Shirley Houghton for the Conservatives was the only candidate to mention river transport.

"One of the things that Boris [Johnson] really wants to do is actually integrate the river services," she said.

"The river is completely under-utilised it's a complete mish-mash of privately-owned piers, publicly owned things and he wants to introduce it into the pay-as-you-go Oyster scheme

"That would make a big difference to people who live on the river."

As for Thameslink, Houghton was scathing about the probably impact of the work at London Bridge on commuter lines in Southwark and Lambeth: "The loss of the South London Line just to promote the Kent commuter lines is quite frankly disgraceful and a slap in the face to everyone who lives in South London."

Responding to a question about the road system at places like the Elephant and Castle, Patel condemned what he believed to be a lack of consultation about the regeneration of the area.

"You have to talk to the people who use the area and find out what their priorities are," he said.

She also referred to Brian Paddick's recent announcement that as Mayor he would pursue the development of low-cost Ultra Light Rail tramways, including one along the Old Kent Road.

Cllr Pidgeon was strongly critical of Transport for London: "For me it is the most unaccountable public body going," she said.

"I see my role as an assembly member to genuinely hold them to account on both local issues and London-wide issues."

"One thing we did have a success on four years ago was to get the additional bus stop on Borough High Street just opposite the Slug & Lettuce. There used to be a huge walk when you came out of the tube to get to the nearest bus stop. That was something that I made strong representations on – with others – and we managed to achieve that."

Asked about the cyclist- and pedestrian-unfriendly gyratory systems in the area, she replied:
"In the past when I used to cycle more I have cycled round the Elephant & Castle and Bricklayers Arms roundabout and you do feel like you're taking your life in your hands and it is very scary.

"There are schemes in place to resolve some of these [problems].

"At the Elephant we have got huge plans to get rid of the southern roundabout as part of the regeneration – currently held up by Transport for London I'm afraid to say.

"In terms of something like the Bricklayers Arms roundabout flyover it takes a huge amount of Transport for London money to maintain it. It also takes up a huge amount of land. What we need to see is how we can work together on this, and I think there's already a group that's put a bid together through Cleaner, Greener, Safer to have a look at this."

"As long as you have the capitalist system our needs and interests will not be addressed," said Bill Martin.

Val Shawcross has been Lambeth & Southwark's representative on the London Assembly since it was created in 2000. She set out her record.

"For the past eight years I've been working on the GLA to support our Mayor, Ken Livingstone, and to support his policy programme ... and most recently to lobby him for investment in our young people.

"I've had the privilege of supporting him in his public transport investment programme – including that difficult period when the Mayor introduced congestion charging and we felt besieged at City Hall."

She also spoke of her work as chair of the London Fire and Emergency Planning Authority – which runs the London Fire Brigade – "trying to bring that organisation into the 21st century".

Shawcross described a "eureka moment" as a member of the London Assembly's environment committee when she realised "how much we need to transform ourselves as an urban community" in order to tackle climate change and safeguard the environment.

"As the leader of Croydon Council during the installation of the Croydon Tramlink, I'm really committed to the [Cross River] Tram," she said.

"It's a very important mode of transport – high capacity, clean, disabled people-friendly form of transport – it's quiet and it certainly takes more cars off the road which is where we want to be.

"There are too many cold spots in our transport network south of the river. I think Camberwell is ill-served, I think the Loughborough Junction area is ill-served, even the Old Kent Road is quite badly served."

On the question of the area's major road junctions, she replied: "I'm certainly against gyratories and there is a programme to start taking them out because they are basically unsafe – there's a lot of evidence for that.

"Vauxhall Cross was a special issue, and I think that is going to get redesigned.

"The reason that gyratory got laid out as it was is that there was pressure to get it all done before the introduction of congestion charging, because it's on the inner ring round.

"It wasn't the best possible design and had there been more time it would have been done better, and I think lessons have been learnt from that."

He raised eyebrows by suggesting the creation of cycle lanes on pavements throughout London.

He was also the only candidate to propose the abolition of the Oyster card and a return to "affordable, normal Travelcards like we used to have".

"My party is quite fond of the tram as long as it's done properly," he said, describing tramways as part of England's heritage.

He also prompted laughs by suggesting that it should be possible to take bicycles on board buses.

Tell us what you think the most important issues are for the Lambeth and Southwark constituency by completing this two-question survey.