New Archbishop of Canterbury named on notice at palace gatehouse

A legal notice announcing the election of Justin Welby as the next Archbishop of Canterbury has been posted on the Lambeth Palace gatehouse. 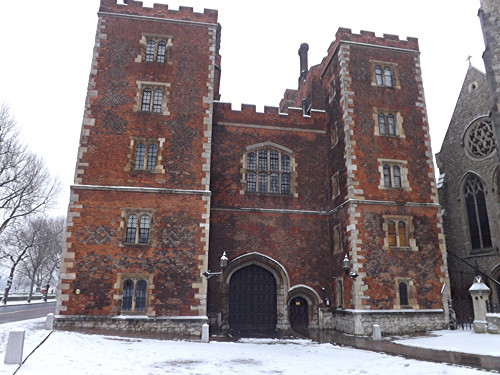 The notice appears at the gatehouse of Lambeth Palace 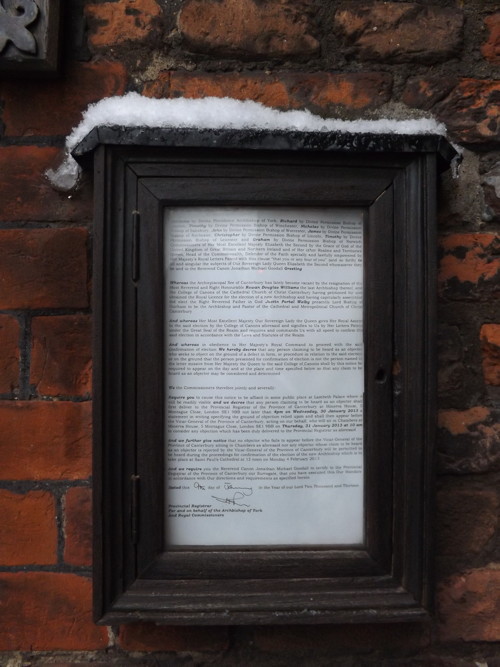 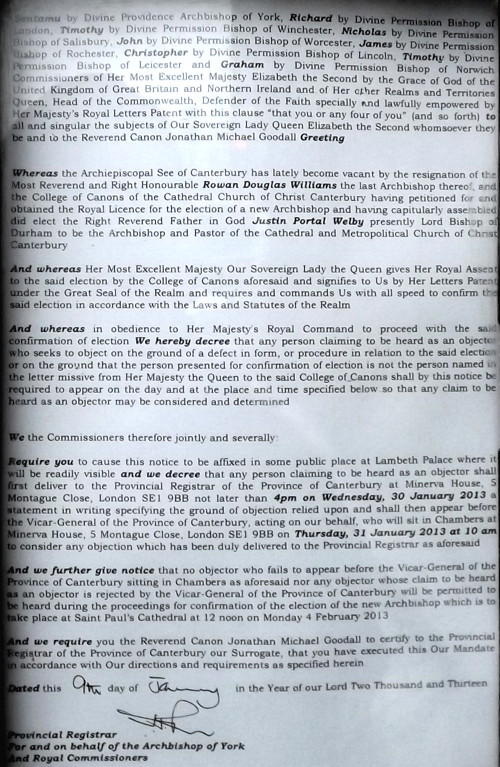 The obscure document has been issued following an election held by the Chapter of Canterbury Cathedral earlier this month. The 35-strong college of canons processed round the cloister before meeting in the 14th-century chapter house to agree the appointment. Membership includes not only residentiary canons but also honorary canons some of whom travelled from abroad.

Only Bishop Wilby's name featured on the ballot paper.

The chapter was in receipt of a letter signed by the Queen which indicated that she was "pleased to name and recommend [Justin Welby] unto you to be elected and chosen unto the said Archbishopric of Canterbury".

Members were free to vote 'no' as some canons had in the past but afterwards the dean, the Very Revd Robert Willis, said that the result in favour was unanimous.

The notice at Lambeth Palace, the archbishop's official residence, has been "affixed" "where it will be readily visible" by order of commissioners acting on behalf of the Queen.

They "decree that any person claiming to be heard as an objector shall first deliver to the Provincial Registrar of the Province of Canterbury at Minerva House (next to Southwark Cathedral) ... a statement in writing specifying the ground of objection relied upon."

Any objection brought to the vicar-general is likely to fail since it can only be on grounds that the election was defective or did not include the name of the royal appointee. Issues of doctrine are not relevant. Not only is Bishop of Durham Justin Welby the Royal nomination but the election was witnessed by public and press and recorded on tape.

Archbishop-elect Justin Welby can therefore expect his election to be confirmed as intended across the river in St Paul's Cathedral at noon on Monday 4 February.

From that moment he becomes the 105st Archbishop of Canterbury.

He is due to move into Lambeth Palace later in the month before being formally enthroned at Canterbury Cathedral on St Benedict's Day Thursday 21 March.