Thameslink at Blackfriars: Wimbledon keeps through trains in 2018

The Government has announced that Thameslink trains from the Wimbledon loop will continue to run through central London to St Pancras and beyond, rather than terminating at Blackfriars as proposed. 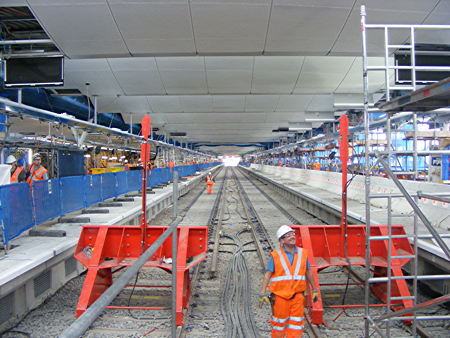 Blackfriars Station has been rebuilt with the expectation that trains from Herne Hill via Elephant & Castle would use the terminating platforms on the western side of the bridge, thus avoiding the need for trains to cross the tracks used by services from South East London and Kent.

Politicians and rail user groups representing residents of 'Wimbledon loop' stations mounted a strong campaign to maintain a through service to North London, despite Network Rail's previous insistence that "reversing this arrangement is not considered operationally viable".

However, the Department for Transport announced this week that trains from the Wimbledon loop will continue to run north of Blackfriars when the full Thameslink timetable is introduced in 2018.

"The Wimbledon Loop provides a vital service for thousands of Londoners every day, and we have worked hard to safeguard its future after listening to the concerns of local people and stakeholders," said rail minister Simon Burns.

"The Thameslink Programme is having a huge impact on improving rail services across London and beyond, but the department was always concerned that the initial proposals for this route were not quite right.

"I am therefore extremely pleased that Network Rail have relooked at the plans and am confident this decision will provide benefits to rail users for years to come."

When upgrade works are completed, the Thameslink 'core' between Blackfriars and St Pancras International will have a maximum capacity of 24 trains an hour.

The decision to send four Wimbledon trains an hour through the centre of London means that some rush-hour trains from stations in Kent – including Rochester and Orpington, and Beckenham and Kent House in South East London – will in future terminate at Blackfriars.

The change of plan has been welcomed by train operator First Capital Connect.

Managing director Neal Lawson said: "Our customers on the Wimbledon Loop have campaigned hard to keep services from terminating at Blackfriars from 2018 and we welcome the Government's decision.

"As the operator of the existing franchise, we recognise that this is an important link that should be retained. More than 16,000 journeys are made on the loop each weekday and we have added services and additional capacity since we took over in 2006."

He added: "Our customers on the Wimbledon Loop have shared the pain associated with the essential engineering work that has been carried out to make this happen and they will now benefit when it is completed in 2018."

However, the London TravelWatch watchdog group has warned that the new plan may have implications for the new Thameslink rolling stock that will shortly be ordered as the platforms on Wimbledon loop stations can currently only accommodate eight coaches, whilst other stations on the Thameslink network – including Blackfriars – have been expanded to accommodate 12-car trains.