Southwark Council's annual meeting will be limited in length so that councillors can join the incoming Mayor's drinks reception more quickly. 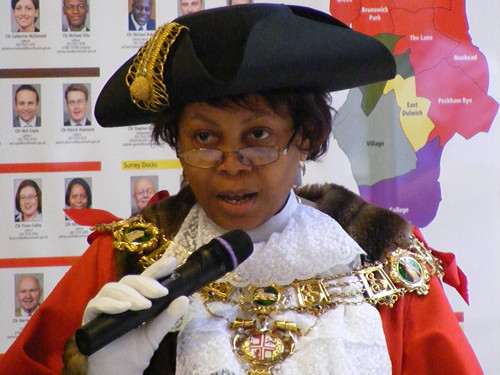 Southwark's current Mayor Cllr Althea Smith. Her successor will be elected next month at the mayor-making ceremony

Since last year the annual meeting and mayor-making ceremony – held in May each year – has been held at the council's Tooley Street headquarters.

Last week Southwark's ruling Labour group voted through a proposal to set a 90-minute guillotine on the formal business part of the meeting to allow the new mayor and councillors to get to the drinks reception – held in honour of the incoming mayor – more quickly.

Business due for consideration at the meeting has also been reorganised to reduce the number of votes from 15 at the last annual meeting to as few as four this year.

Liberal Democrat councillors tabled an amendment to block the move to shorten the meeting, but it was voted down by the majority Labour group. In turn the Lib Dems have come under fire for playing 'buzzword bingo' during last Wednesday's meeting.

"When the council is spending thousands of pounds putting on a public meeting, it has an obligation to make the most of it and get value for money for residents," said Lib Dem councillor Lisa Rajan.

"Cutting public meetings short so councillors to go a swanky drinks reception is ridiculous and a complete waste of taxpayer cash."

"Labour council chiefs cannot get the basics right on things like housing and street cleaning, yet they want to spend more time at private parties with the Mayor rather than sorting out local problems."

Tory leader Cllr Lewis Robinson said: "I think it's a poor decision and will result in poor decision-making on issues which are quite important to the governance of this local authority, so I cannot support this proposal."

He added: "There is plenty of time the rest of the year to put on our hair-shirts, stop playing word bingo and stop shouting at each other to actually conduct some real business about the values we would like to see here that protect the vulnerable, support our police and give a future to our children.

"Those are the important things, not discussing whether a celebration of the first citizen is a jolly or whether it is a proper marking of respect for that person."

Labour leader Cllr Peter John argued that the current arrangements for mayor-making were unsatisfactory and the changes would help the process to run more smoothly.

He said: "It must be within all of our wit and possibility and potential as human beings to do the bit of business that we need to do within an hour and a half so that we can then allow the new first citizen to celebrate their appointment."

"We heard from the Borough's most senior police officer, Southwark Youth Council, a Southwark Young Advisor and representatives from St Giles Trust who do great work rehabilitating ex-offenders.

"Rather than engage in this debate, as Southwark taxpayers expect them to do, Southwark's Liberal Democrat councillors chose to play bingo while one Lib Dem councillor, former council leader Nick Stanton, chose to read a book through most of the meeting.

"Each council assembly meeting costs taxpayers Ł12,000 so it is important that councillors from all parties engage in them in a serious way.

"Their behaviour is disrespectful to the people who came to talk about their experiences, to the democratic traditions of our borough and to Southwark taxpayers who expect councillors to represent them at these meetings."

Lib Dem chief whip and Chaucer ward councillor Tim McNally said that the constitutional change "totally embodies Labour values here in Southwark: wine terraces, drinks parties, jollies, trips to Cannes, Olympic tickets, constant lunches with developers – these are the values that come from the top of the Labour Party opposite".