HMS Edinburgh - the last of the Royal Navy's type 42 destroyers - passed through Tower Bridge on Tuesday afternoon as she arrived in London for events to mark the 70th anniversary of the Battle of the Atlantic. 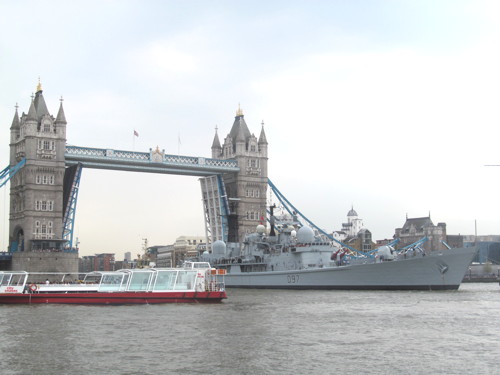 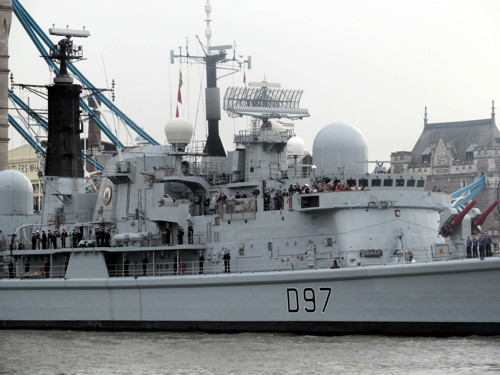 The destroyer is moored alongside HMS Belfast until Sunday afternoon. Guests who will visit the ship during its stay in London include the Mayor of Southwark Cllr Althea Smith.

"I am delighted to welcome Her Majesty's ships Illustrious, Edinburgh and Blyth to London to launch the Royal Navy's nationwide commemorations of the 70th anniversary of the Battle of the Atlantic," said Commodore Martin Atherton.

"HMS Illustrious will also be renewing her long-standing affiliation with the City of London.

"It is particularly poignant for HMS Edinburgh.

"She is the last of our type 42 destroyers and this will be her final visit to the capital, as she will shortly decommission after 30 years of sterling service to the Royal Navy.

"Her predecessor, a town-class light cruiser, has a battle honour for her involvement in the long, perilous Atlantic campaign."

The third ship, HMS Illustrious, is moored downriver at Greenwich.

• On Thursday HMS Belfast will host Anglo-Russian commemorations of Victory Day, culminating in a free performance by the Royal Philharmonic Concert Orchestra at Hay's Galleria with the cannons of HMS Belfast fired as part of the 1812 Overture.